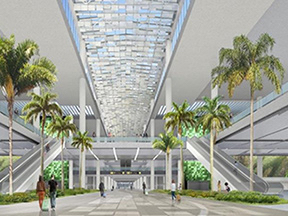 PCL Construction Services, Inc. has recently been awarded the multi-million dollar construction of Phase 1 of the Airside Terminal at Orlando International Airport’s South Terminal C, the company said in a news release. The new airside terminal is part of the $1.8 billion south terminal development.

“We are thrilled to play a leading role in bringing together local and diverse businesses in the construction of Orlando International Airport’s new terminal,” said Rick Goldman, district manager for PCL in Orlando. “As part of the nation’s 9th busiest airport for passenger travel, this project will provide a seamless departure and arrival experience for millions of travelers each year.”

This is PCL’s 12th project at Orlando International Airport. PCL is also currently working on the Main Ticket Lobby Modifications project, which is expected to be complete in December 2017.

Preconstruction on the new airside terminal has started in August, with construction beginning in the first quarter of 2017. The project currently has a completion date of October 2019.

See prequalification information for subtrades wishing to work with PCL.

See construction opportunities with the airport.