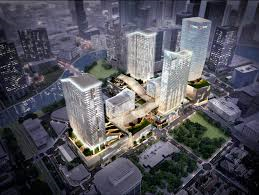 Due to open on November 3, the $1.05 billion Brickell City Centre is still undergoing finishing touches. As a walk-through for the media, the Miami New Times reported construction inside the mall was still active.

It has been reported that a select number of stores was to be ready for the official ribbon cutting last week, and the rest will hope to open in time to take advantage of the upcoming holiday season. Retail spaces are more than 90 percent leased.

The New Times reports that the developer behind the project, Stephen Owens, president of Hong Kong-based development company Swire Properties, explained that the project actually began with the purchase of the land in 2008. Groundbreaking took place in 2012. He was quoted as saying: “We worked nonstop for four years and four months. So we’ve delivered a project of 4.9 million sq. ft., well over a billion dollars, and we’ve done it in record time.”

Designed in part by Arquitectonica and Paris-based Hugh Dutton Associés, the Brickell City Centre includes a $30 million environmental management system – described as a “sculpture-like climate ribbon” that connects all components of the centre over three blocks. “The glass-and-steel trellis is intended to provide breeze, shade, and water collection” and is said to “suggest connectivity with the surrounding community.”