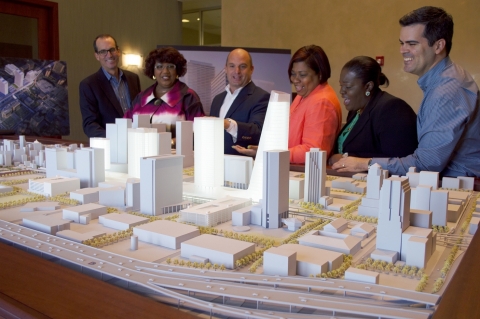 All Aboard Florida has hired The Vailon Group to implement the company’s Disadvantaged Business Enterprise (DBE) program in Miami-Dade County. The Miami-based consulting firm, well known for its advocacy on behalf of small businesses, will work with Suffolk Construction, the passenger-rail company’s general contractor that is building its MiamiCentral train station, to ensure that local subcontractors and area workers are included in the project’s construction.

When completed in 2017, the nation’s first privately funded, express passenger-rail system will connect Miami to Orlando with intermediate stops in Fort Lauderdale and West Palm Beach, a news release says. The 235-mile rail-and-infrastructure project is expected to create 10,000 jobs along the rail corridor. MiamiCentral is estimated to generate 457 jobs during construction, and 408 positions when the station is fully operational. The county will realize $1.3 billion in economic benefits during the station’s construction-and- implementation phase.

“The Vailon Group has a proven track record of advocacy supporting local workers and businesses,” said All Aboard Florida executive vice-president of development and construction Scott Sanders. “Our partnership with The Vailon Group will focus on opening up more opportunities and making them more accessible for residents and small-business owners in our community.”

Marsha E. Jackman, the county’s head of business development for more than a decade, launched The Vailon Group in 2007 to help businesses in South Florida diversify and expand their reach into local communities. The firm’s clients include the city of Miami; Port of Miami Tunnel Project; Wexford Science, developer of University of Miami Life Science & Technology Park; Resorts World Miami and Sun Life Stadium.

“All Aboard Florida is creating an innovative and transformational rail-infrastructure system and is committed to creating jobs in those areas surrounding the project, including Overtown, the city of Miami, and Miami-Dade County,” said Jackman, president of The Vailon Group.” “What is exciting and already apparent is the company’s level of commitment to hiring locally, and to reaching out to and forging long-lasting relationships with small and local businesses. Our firm’s role will be to assist the company achieve these goals and to synergize the community through this engagement.”

MiamiCentral will be the flagship train station in the All Aboard Florida rail network. The mixed-use residential, office and commercial complex will encompass nearly three million square feet comprised of a nine-acre multi-modal hub in downtown Miami just east of Miami-Dade County Hall, and a two-acre site in Historic Overtown. The hub will connect residents, office workers, visitors and All Aboard Florida passengers with Miami’s public transit systems and proposed Tri-Rail Downtown Miami Link. The Overtown structure will include parking to support the transportation center.

The new passenger-rail trains will arrive and depart MiamiCentral on elevated tracks 50 feet off the ground. A pedestrian-friendly concourse of specialty shops and eateries will be at street level below the train platform. This innovative design will allows through-streets to remain open to traffic.