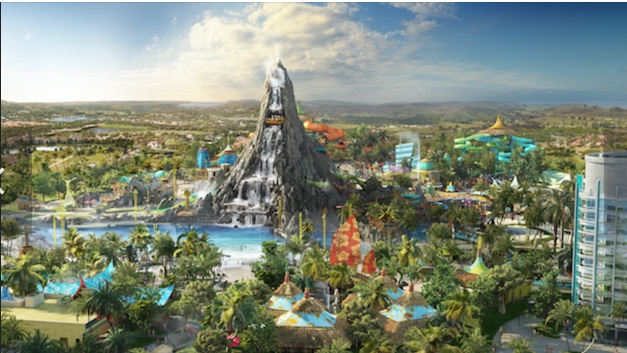 Universal Orlando is touting a reimagined experience for waterpark fans when Volcano Bay opens in 2017.

The new 28-acre water theme park attraction just south of the Cabana Bay Beach Resort, will have 18 attractions, including a multi-directional wave pool, a winding river, multi-rider raft rides, body slides that drop from the top of the volcano and a “state-of-the-art” marquee attraction.

The volcano is the focal point of Universal’s rendering. At the base of the volcano is a walkway that goes toward the center under a waterfall and what appears to be a viewing platform for guests to stand on.

A permit issued by the city of Orlando shows some of that work includes the “construction of restroom facilities, rock work, exterior stairways, a pedestrian bridge and platforms associated with rides,” according to city documents. The permit’s project is titled as “Project 533,” which is the project codename for Volcano Bay.

City documents also show the value cost of construction for that work is estimated at $650,000, and the contractor is Austin Commercial LP, according to Orlando Business Journal.

Volcano Bay will be the sixth water park in Central Florida and the second owned by NBCUniversal, the theme park’s parent company. Two are at Disney, one is at SeaWorld, and another is at Legoland Florida in Winter Haven.