Pompano Beach officials have reviewed two major development proposals: a mixed-use project on Federal Highway/U.S. 1 and an expansion of the Pompano Park Isle of Capri Casino.

In the proposal the developer is rezoning the property for up to 343 residential units and 75,470 sq. ft. of commercial/retail space. The project would total 751,470 sq. ft. 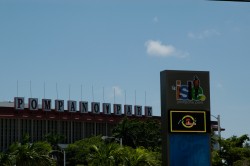 “The idea is to build a larger mixed-use development around the marina,” said Andrew Sturner, president and CEO of Aqua Marines Partners. “This was done in cooperation with the city in coordination with the city’s master plan and what it’s looking to accomplish.”

Meanwhile the owner of the Pompano Park Isle of Capri Casino has proposed building a two-story addition for office and warehouse space.

PPI Inc., part of St. Louis-based casino operator Isle of Capri Casinos, filed an application to build a 49,850-sq. ft. structure as an addition to its facilities at 777 Isle of Capri Circle. The project would allow the casino to move those operations out of its grandstand building, which would be demolished, the South Florida Business Journal has reported.

The proposed building on the casino’s southwest corner  has been designed by Gallo Herbert Architects.