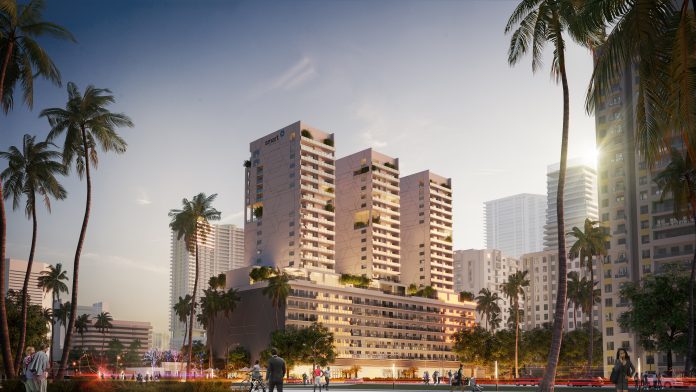 Developers say the three-tower master project on1.23-acres in Miami’s West Brickell area focuses on smart use, design and tech. The mixed-use Tower 1 will include 50 hotel rooms and 50 condos.

Santiago Vanegas, founder, CEO and president of Habitat Group, with Valentina Perez-Cea, the organization’s development director, led the closing of this construction loan.

Smart Brickell Tower 1 is slated for completion in 2021, making it the first alternative project to be completed in Brickell.

The three towers at at 239 SW 9th St. in Miami were designed by architect Hernando Carrillo, with concept and branding by Gensler.

The secured loan marked the beginning stages of construction pilings on Nov. 18, followed by groundbreaking of Tower 2 in early 2020.

Tower 2 will encompass 25 stories consisting of one- and two-bedroom floor plans from 558 to 1,117 sq. ft. The building will also adhere to LEED certified regulations. Towers 1 and 2 will follow the same design.