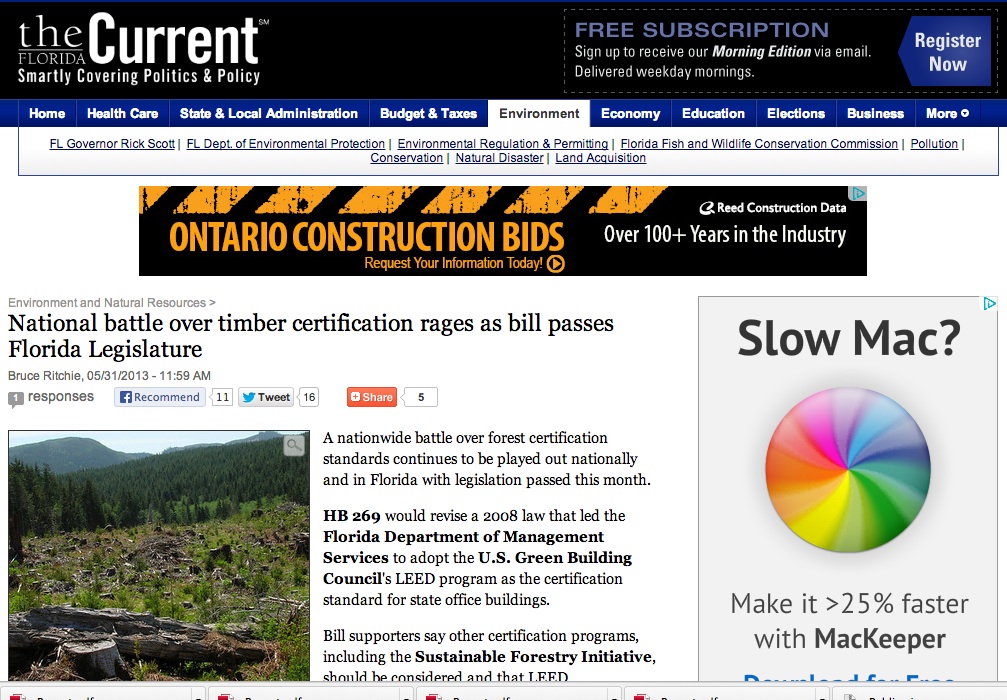 A nationwide battle over forest certification standards continues to be played out nationally and in Florida with legislation passed this month, the Florida Current reports.

HB 269 would revise a 2008 law that led the Florida Department of Management Services to adopt the U.S. Green Building Council’s LEED program as the certification standard for state office buildings, the report says.

Bill supporters say other certification programs, including the Sustainable Forestry Initiative, should be considered and that LEED discriminates against Florida wood growers, the publication says.

However, the Seattle  group ForestEthics has filed a Federal Trade Commission complaint contending that the Sustainable Forestry Initiative represents “greenwashing” by the timber industry that violates federal certification standards.

“The Sustainable Forestry Initiative label is the timber industry’s cynical effort to get a piece of the highly valuable green marketplace in the U.S., which is currently valued at $500 billion annually,” said  Aaron Sanger of ForestEthics in a news release.

ForestEthics also said the Sustainable Forestry Initiative threatened to sue the group for its criticism. An SFI spokeswoman said the “cease and desist” letter sent last month was not a threat to sue.

“We feel that the complaint has no merit and it’s a rehash of a similar filing they made in 2009 where the FTC took no enforcement action,” said Monique Hanis, chief operating officer and vice president for communications at the Sustainable Forestry Initiative, Florida Current reports.

The Current website says that a FTC spokesman said the agency received the ForestEthics letter and another one in 2009. But he said investigations are not public and the agency does not generally comment on them.

Rep. Halsey Beshears, R-Monticello and sponsor of HB 269, said he wasn’t aware of the dispute between ForestEthics and the Sustainable Forestry Initiative but he was aware of concerns about the LEED program.

The Florida Current reported in March that HB 269 represented a backlash against LEED, which stands for Leadership in Energy and Environmental Design. That program depends on the Forest Stewardship Council for its wood certification.

Since then, the North Carolina House has passed HB 628 requiring consideration of the Sustainable Forestry Initiative and the American Tree Farm System.