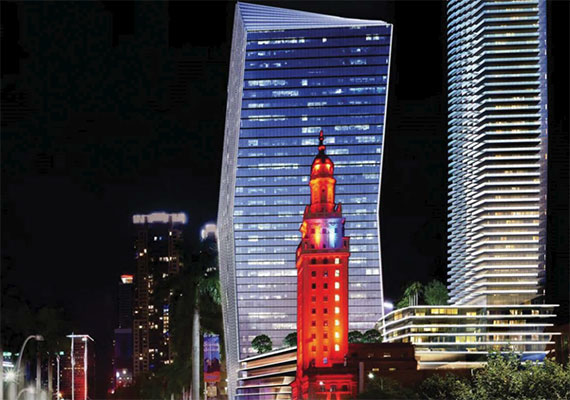 The proposal by Gregg Covin Development with Oppenheim Architecture was kept as a backup in case negotiations with the other two groups don’t succeed. The fourth proposal, from Pi Art Tech and Trade Center at MDC LLC, was recommended for elimination.

The proposals include a cultural center with a 1,600-­seat performing arts theater, a conference center that can house 3,000 people, a museum measuring at least 100,000 sq. ft., and parking.

The committee’s recommendation will go to MDC president Eduardo J. Padrón for his possible recommendation to the college’s board of trustees. Then negotiations could begin. MDC provost and PEC member Dr. Rolando Montoya told the South Florida Business Journal that if those negotiations result in one agreement being reached, it would have to go through the process again in order to begin work on a final agreement.

“We would initiate the conversation with Related and Nader and in the first couple of meetings with them we might feel if a marriage is possible or not,” Montoya said. “I don’t think we need to continue talking for weeks or months…There are some key elements that are critical for the college that we would want to go deeper in.”

The PEC scored the proposals on four criteria, with these results:

“We are pleased the evaluation committee recognized the merits of our proposal by ranking us number 1, and we look forward to working with the college to achieve its vision,” said Lissette Calderon, president of international and strategic projects for the Related Group. “The Related Group has, by far, the most development experience and financial strength, which is necessary to deliver a complex public-private project of this type.”

Winning bidder Related proposes a 75­-story condominium tower as part of its plan, as well as a 39­story office tower, a 100­room hotel and private club. The cost for the public portion is estimated at $105 million.

“By picking two (for negotiations), it opens itself up to a transparent and important process,” Riley said. “We are eager to highlight the strength of our team and the strength of our proposal. It allow (MDC) to get a best and final offer from both respondents.”

According to South Florida Business Journal, The Related Group would ask for 36 months to secure a construction loan, mentioning nothing about sales. The Nader + Museu proposal would seek to pre-sell 125 condos, or half of the first tower. The Related Group’s presentation showed that it had more than $1 billion in equity and could potentially build the project without a loan. However, in the current Miami condo market, it’s extremely difficult to obtain a construction loan without at least 50 percent of units pre sold.

Apart from providing MDC the cultural center, the Related Group offered a $1 million scholarship donation, $15 million in naming rights for the culture center (to be paid by the developer if a sponsor isn’t found) and 10 percent of all condo sales above $750 per sq. ft., for an estimated $5.3 million, published reports say.

Both the Related Group and Nader + Museu propose to access tax increment financing from the Southeast Overtown/Park West Community Redevelopment Agency to fund the project’s infrastructure.