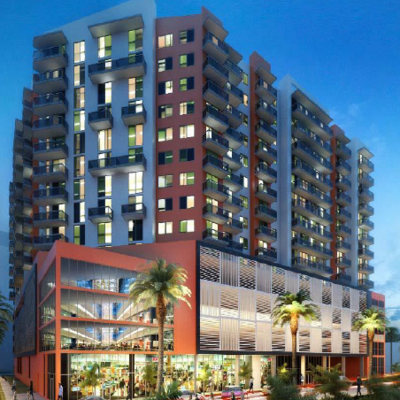 The new owner of H3 Hollywood, a previously unfinished condo development, has closed on a construction loan to complete the project stalled as a shell since 2016.

Kaufman Lynn Construction is expected to complete the building in less than 18 months.

Hollywood East LLC, led by broker Vivian Dimond and Cristina Pereyra Alvarez, closed on a $48.65 million construction loan from Trez Forman Capital Group for the unnamed 15-story, 247-unit building at 2165 Van Buren Street in Hollywood, according to a statement.

The original project’s general contractor LB Construction, which won the bid for the project at a foreclosure auction, sold the property in April 2017 to Dimond’s Hollywood East LLC.

Trez Forman’s president and CEO Brett Forman arranged the financing for the Hollywood project, according to the release.

The previous owner built the shell for 13 of the 15 floors. The building will feature a pool deck on the fifth floor, nearly 4,800 sq. ft. of ground-floor retail space and a 433-space parking garage.

The 1.68-acre property is next to a proposed Brightline station, according to the release. It’s also near Young Circle, where MG3 Development Group is planning Parc Place, a mixed-use project with 433 apartments, retail space and a parking garage, The Real Deal reported.