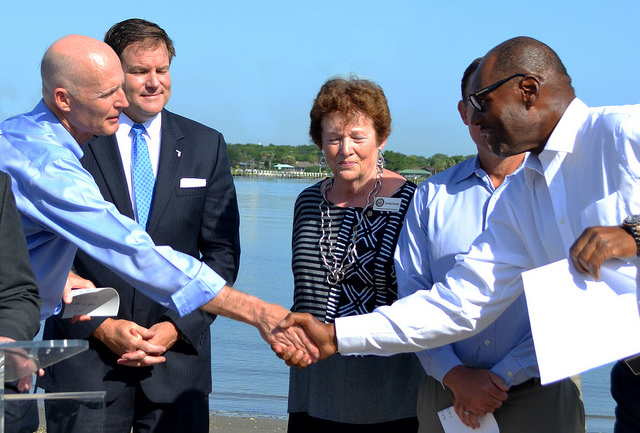 Construction has started on the  $43.5 million Mile Point project at Jacksonville’s port to remove a navigational hazard for large cargo ships.

“This port is on the move . . . There are a lot of great things happening here,” Florida Gov. Rick Scott said during a short news conference.

The Army Corps awarded the construction contract to Seattle-based Manson Construction Co. The state has agreed to front the project’s full cost, and wait for the federal government to reimburse 65 per cent.

“But the port also wants to dredge the St. Johns River from 40 to 47 feet so larger cargo ships that are fully loaded can call on Jacksonville’s port, a project estimated to cost $700 million that would require big cash commitments from every level of government,” Florida Times-Union reports.

The Mile Point project would calm currents by removing a chain of rocks from the area, with other alterations/

“The state has not committed to such an arrangement for harbor deepening, and the federal government has not yet committed any money,” the newspaper reported.