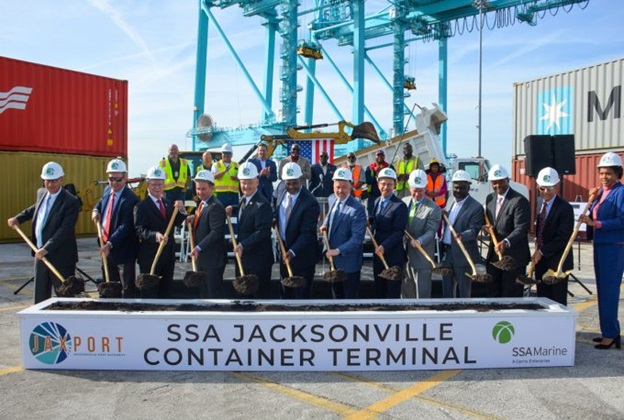 The SSA Jacksonville Container Terminal is an expansion of SSA’s current leasehold at Blount Island and includes $238.7 million in infrastructure and equipment upgrades.

Operations will continue throughout the redevelopment, which is expected to be complete in 2023 — coinciding with the completion of the federal project to deepen the Jacksonville shipping channel to 47 feet.

Harbor deepening is ahead of its original schedule and anticipated to be finished later that year, based on continued funding. Phased yard improvements are underway at the terminal that will allow the facility to accommodate up to 700,000 20-ft. equivalent units annually. Berth upgrades are expected to be complete in 2021 and will allow the terminal to simultaneously work two post-Panamax vessels.

The Jacksonville Harbor Deepening Project includes construction of a vessel turning basin that will allow larger vessels calling on the terminal to turn at Blount Island.

The SSA Jacksonville Container Terminal offers 80 acres of terminal operating space, with the option to grow up to 120 acres as space becomes available. The facility features three post-Panamax electric container cranes and terminal plans include the addition of three more state-of-the-art container cranes.

The facility is expected to create or protect 3,500 jobs, in addition to attracting new businesses and jobs resulting from the terminal’s increased efficiency and capacity.

The SSA Jacksonville Container Terminal is a public-private partnership between JAXPORT and SSA Marine, with more than 65 percent of the landside improvements being funded by SSA.