How do you decide on the best Florida engineering projects?

The Florida Institute of Consulting Engineers (FICE)/American Council of Engineering Companies (ACEC FL) have developed an answer: A comprehensive recognition and awards program  with independent judges assessing complex projects and proposals for:

This year, FICE selected 10 worthy projects for Grand Awards and, out of them, Jacobs Engineering Group Inc., received the highest Grand Conceptor Award for the port of Miami Tunnel in conjunction with the Florida Department of Transportation (FDOT) Division Six.

Participation in the FICE/ ACEC FL Engineering Excellence Awards generates excitement for the consulting engineers and their staff, enhances client appreciation, and propels business development efforts,” said FICE spokesperson Kate Bonnevier. “It is a great opportunity for Florida firms to showcase their designs and studies, and gain the exposure they deserve for innovative multi- disciplinary engineering projects.”

Here are details about the winning projects and why they are worthy of recognition.

This project, which opened to traffic on Aug. 2, 2014, is the fist bored transportation tunnel ever constructed in Florida.  “It was successfully accomplished in extremely difficult geologic conditions, and features fire and safety features not previously used in US tunnel projects, including massive hurricane flood gates and a deluge sprinkler system,” the award citation says.

The Miami Herald in an editorial review went further, describing it as a “job well done.”

The tunnel, built under the public-private partnership (PPP) model, was completed approximately $90 million under the $760 million budget, even with additional work, including a major widening of the 2,500-ft. long MacArthur Bridge and substantial reconstruction of the port’s public roadway system.

“The tunnel has been a great success,” tunnel CEO Christopher Hodgkins told The Herald’s editorial board. “We have changed the quality of life in downtown Miami.’’

FDOT pays Miami Access $3 million a month (for the next 30 years) to maintain and operate the tunnel, and then ownership reverts to the state.

Hodgkins said the tunnel has won local goodwill by employing local residents, including Haitian and African Americans and women.

“The award-winning tunnel is a work of art — down to the two 50-ton metal gates that will seal it up if a major hurricane approaches,” the Herald reports.  The tunnel has been designed with extensive safety features and while there have been a number of incidents, mostly traffic accidents, there haven’t been any serious problems since its construction.

The other nine Grand Award winners include: 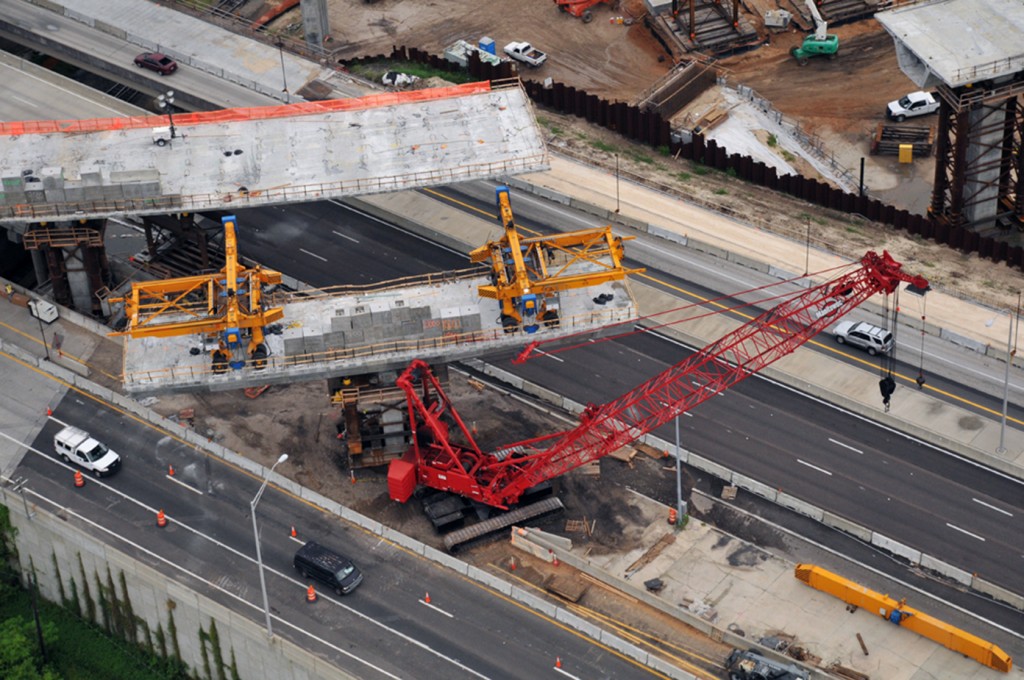 “The connector is built over an old industrial area enhancing the environmental benefits of the project,” the FICE award citation says. “Hazardous material remediation was accomplished and new stormwater management treatment facilities helped reduce pollutants discharging into McKay Bay Preserve, an environmentally-sensitive habitat for migratory shorebirds. With improved mobility in this area, the connector advances better air quality and it promotes safer access for local residents.”

“The steel superstructure added complexity in maintaining the stay forces during construction,” FICE’s citation says. “The construction industry loads are shared between girder and stays, with the stays acting more as pre-stressing rather than vertical support.”

The design is “highly aesthetic, durable and cost-effective,” FICE says, for the project completed near budget and 4.5 months ahead of schedule.

Finley Engineering won a separate award for the US 281 bridge at Marble Falls, constructed by Archer Western Contractors, after the design-build team proposed design modifications and means and methods allowing a five per cent savings on the original TDOT estimate, resulting in a $2 million savings on the $28.65 million project.

The 958-ft. long bridge has three spans, with six ft. -wide sidewalks and a fully lighted substructure. “Use of proprietary software for segment geometry and Bridge Information Modeling (BrIM) made it possible to develop details quickly to meet the demanding schedule, including integrated segment drawings combining reinforcing bars, bolts inserts (for utilities), electrical conduits, etc., all into one drawing,” the FICE said.

“Innovative planning and engineering transformed the area into a community asset that is chiefly a stormwater management and water quality improvement facility,” FICE’s citation says. “Two stormwater ponds served by a concrete box culvert treat runoff from the surrounding 1,500-acre basin.  The park design integrates stormwater facilities that are aesthetically and environmentally appealing, including the reimagined historic ‘cascades’ as a central waterfall feature – in a flowing ‘floodable’ green space.”

This project – the first Florida P3, and the first use of availability payments in the nation – included reconstructing and widening 10.5 miles of the I-595 mainline and associated improvements to frontage roads and ramps.  It included 63 bridges, as well as 2.5 miles of Florida’s Turnpike, including a direct express lane connection.

The project helped pave the way for future P3 projects in Florida and the U.S., the citation says.

Over a six-year period, the engineer helped the county “plan, design and implement the complex modernization of their 1970s-era signal system to an advanced traffic management system (ATMS) for the twenty-first century – without any disruption of services to the traveling public or adverse traffic impact.” 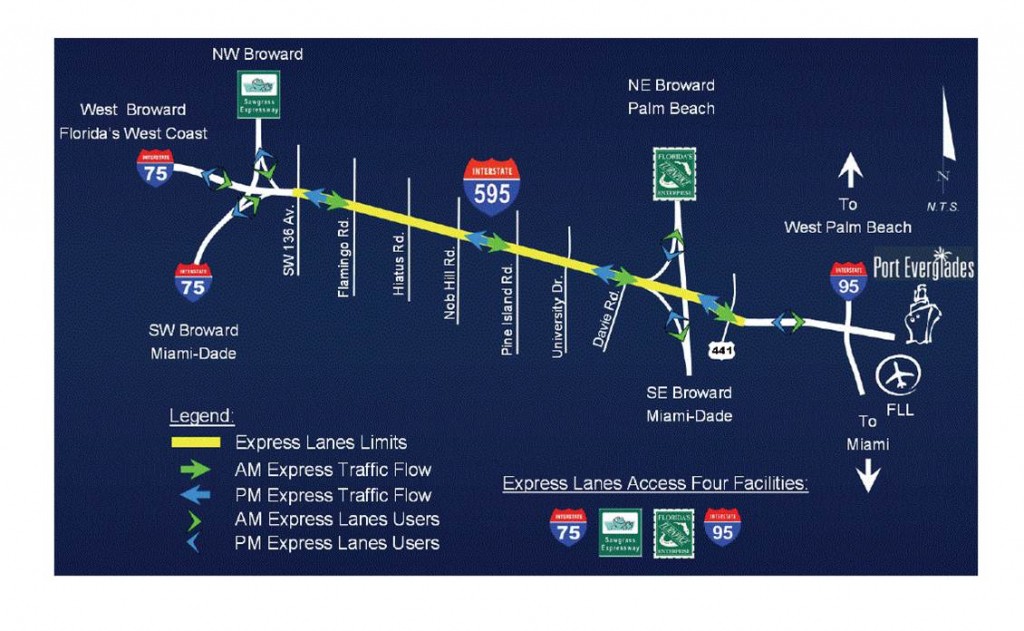 The system has growth capacity for up to 4,000 signals.  As well, because of the design’s flexibility, the county could reuse 1,700 traffic controllers that would otherwise cost $17 million to replace, the citation says.

In September 2013, a US Naval ship under tow struck the Matthews Bridge in Jacksonville, the state’s first and oldest high-level cantilever truss bridge.  The ship severed the bridge’s north lower trus chord, nearly causing a collapse.  “The geometry and stability of the bridge were compromised, requiring quick, efficient and well-planned repair effort to restore this landmark.”

The bridge reopened only 33 days after impact, 12 days ahead of schedule. “Considering the challenges posed by the severity of the damage, weather, and a multitude of complex aspects, the project is an amazing accomplishment for all involved,” says the FICE citation.

“The team overcame an existing federal lawsuit and strong local opposition by implementing an intensive public involvement campaign that included numerous public meetings and 3D visualization imagery to convey project vision, goals and aesthetics,” the FICE award says. “These and other outreach efforts built consensus among stakeholders and concerned citizens.”

The bridge in western Martin County traces its roots to a one-way swing bridge constructed in 1927, replaced by a single bridge in 1965. WGI engineers “redesigned this ‘gateway’ to the City of Indiantown as twin bridges.”

Successful project innovations included a unique and strategic land purchase that allowed the bridge to be shortened nearly 1,000 ft., saving taxpayers approximately $15 million. The engineering design team “also provided innovation and signifiant cost savings by relocating the ponds from underneath the fixed-span, high-level bridge, where it is difficult to maintain turf,” WGI said in a news release. The design-build team of WGI and Cone & Graham set newly approved 84-foot Florida I Beams (FIBs)  spanning 185 feet – the longest FIBs ever set in the state, and completed the work 104 days ahead of schedule.

“The Big John Monahan project faced many interesting challenges, said WGI president David Wantman. “The Department of Transportation deemed the bridge functionally obsolete, yet it was a primary hurricane evacuation route and part of the strategic intermodal system.”

Wantman said the contractor, engineer, subcontractors and subconsultants “worked seamlessly together with all the involved stakeholders. We are extremely proud of the outcome, and of the recognition of a job well done.”

FICE/ACEC FL encourage submittals for the 2016 Engineering Excellence Awards. The intent to enter form is due by Sept. 18, 2015 and more information can be found at fleng.org.