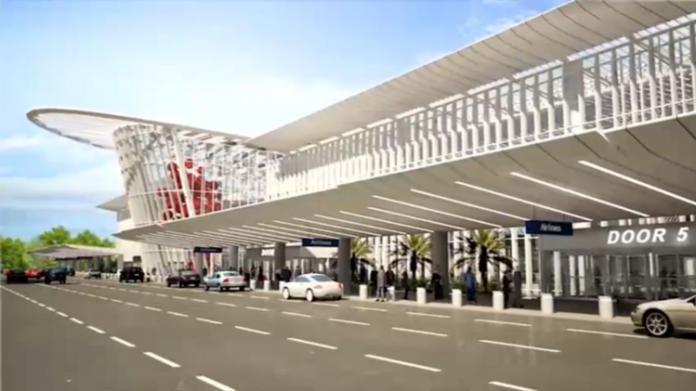 Orlando International Airport has revealed the design of its new $1.8 billion south terminal, now that the Greater Orlando Aviation Authority has given it the go-ahead to begin the construction process.

Construction is scheduled to bring in the first quarter of 2017 with completion set for mid 2020. Schenkel Shultz is the general consultant on the project and HNTB serves as the architect of record.

Designed by Denver-based Fentress Architects, Orlando Business Journal reports that the terminal is intended to “engage passengers and encourage them to enjoy the airport process,” according to Curtiss Fentress, president and CEO of Fentress Architects.

A media centrepiece in the terminal’s two public areas “will include curved TV screens that can show local programming, marketing materials and even be used by passengers to post vacation pictures for others to see.”

Walkways throughout the terminal will also be filled with large-screen TV walls that can “play Orlando marketing materials and help minimize the monotony passengers may feel when walking from the curb to their gates and back.”

There is reported to be potential within a two-story area for retail and restaurants.

“The airport, which will start with 16 gates, is part of a much larger multibillion-dollar expansion at the airport that includes the new terminal, the intermodal transportation facility, a new automated people mover system and multiple upgraded renovations at the existing north terminal. The new terminal will increase the airport’s total passenger capacity to 55 million.”