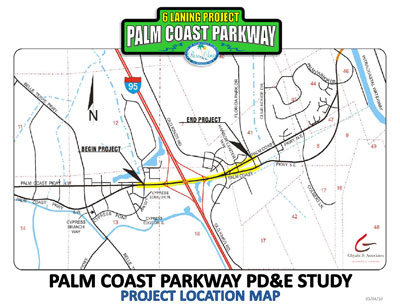 Construction is scheduled to begin in December on a Palm Coast Parkway bridge expansion over Interstate 95, reports News-JournalOnline.com.

The expansion project will cost about $10 million.The Florida Department of Transportation (FDOT) is covering most of the project cost.

In March, the Palm Coast City Council voted unanimously to purchase $175,000 worth of right-of-way property along that 1.2-mile stretch of the parkway.

Carl Cote, who oversees capital improvement projects for the city of Palm Coast, said the city is negotiating a contract agreement with Hill International, which would handle the inspections and ensure the contractor abides by all regulations and agreements.

Bids for the contract are expected to come in by the end of August.

“The expansion will cover the portion of Palm Coast Parkway from Florida Park Drive to Cypress Point Parkway. About 400 trees will be relocated and another 458 will be planted,” according to the city.

Cote said the construction will last up to two years.