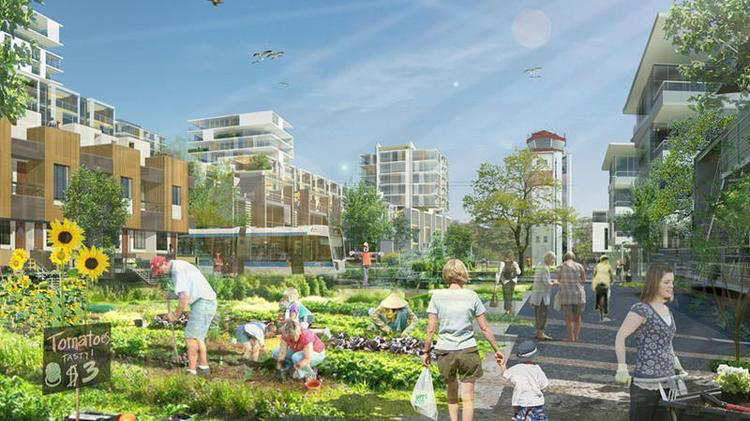 The Grow, a controversial project in east Orlando, has won a key vote as it gets closer to construction.

The Grow’s text and map amendments were approved in a 4-3 vote on July 12 by Orange County’s board of commissioners, Orlando Business Journal reports. “The board will review the rezoning and regulatory plan in a final hearing on Sept. 20, and, if approved, The Grow developer Dwight Saathoff, president of Project Finance & Development LLC, can begin to seek building permits,” the publication reported.

The $1 billion development plans include a revenue-generating farm, community gardens, restaurants with ingredients from the gardens and a neighborhood gathering area in and around a barn on 1,237 acres behind the University of Central Florida (UCF) on Lake Pickett Rd. — and 2,900 homes.

There has been some opposition to the development. After the county commissioner’s vote, Save Orange County said on its website:

Tuesday night, the Board of County Commissioners approved urban development that will break the historic line between urban and rural Orange County.  This was a kick in the face to more than 10,000 citizens who have signed a petition opposing the Lake Pickett Developments on rural and environmentally sensitive lands East of the Econ River. Even more, professional experts advised the Board of such dangers.

However, project supporters have said The Grow is the right move for the area, in light of growth at UCF and Research Park, which hosts thousands of jobs. It’s estimated there are more than 30,000 jobs in east Orlando. They also assert the Save Orange County organization is led by a few NIMBY (“Not in my backyard”) opponents.

“This is a unique opportunity for our company to introduce Orlando to a new residential concept where the emphasis is on sustainable living by integrating farming into neighborhoods,” Saathoff said in an earlier prepared statement. “It will be a landmark community in Central Florida influenced by past generations when people lived off the land growing their own foods and sharing with neighbors. There will be a nostalgic atmosphere throughout the community from the overall aesthetics of the development to the social aspects and outdoor activities.”