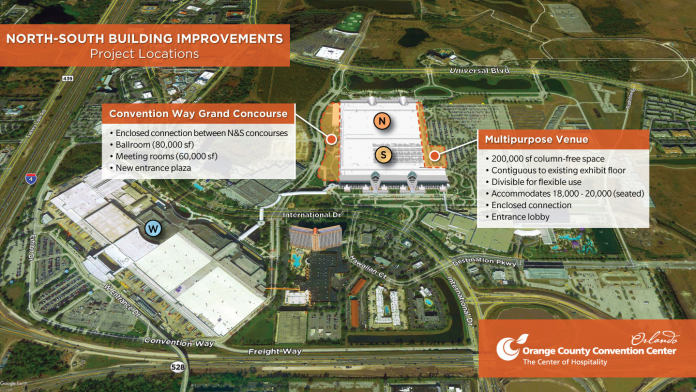 AECOM says it has been contracted by the Orange County Convention Center (OCCC) in Orlando to provide owner’s representative services for the OCCC’s North-South Building improvements.

The $605 million program involves approximately 856,000 sq. ft.  of building improvements, including a conceptual design of a 200,000-sq. ft., column-free multipurpose venue that can accommodate up to 20,000 attendees. The proposed improvements also include the grand concourse along the side of Convention Way road with 60,000 ft. of meeting rooms, an 80,000-sq. ft. ballroom and an entrance to the North-South Building.

AECOM previously served as OCCC’s owner’s representative during construction of the original 2.8-million-sq. ft. North-South Building, which was completed in 2003. “Our company will again provide design, project and construction managers, project controls professionals and subject matter experts to support the design and construction oversight of the new improvements,” AECOM said in its news release.

“We are thrilled to once again collaborate with the AECOM team, especially on a project that will create significant improvements and capacity for our convention center’s capabilities and event offerings,” Jessie Allen, the OCCC’s interim executive director, said in the statement.”AECOM’s institutional knowledge of the OCCC will be advantageous in planning and executing this program.”