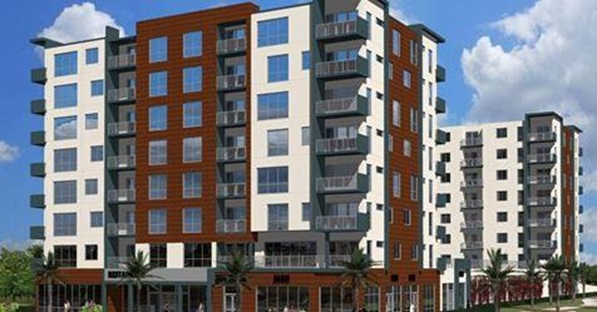 Walker & Dunlop says that it has secured $30.5 million in financing through the United States Department of Housing and Urban Development for a mixed-use, multifamily complex in Melbourne.

Dubbed The Highline, the project by Zimmerman Development will feature 171 units with amenities including a pool, sundeck, gated dog walk area, and a fire pit. A clubroom, catering kitchen, sports bar, game room, and fitness center with a yoga studio represent additional amenities housed within a clubhouse.

Winter Park Construction is the general contractor, while Caribeno Architecture Group is the building’s architect.

Construction is underway on the 262,200-sq.-ft., eight-story building. Completion is planned for the first quarter of 2020, according to the Space Coast Daily.

“The Highline is following a trend that we are seeing throughout Florida, in which cities are encouraging the development of multifamily in the downtown urban cores,” Jeremy Pino, vice president of Walker & Dunlop, in a statement. “The partnership between Zimmerman Development and the City of Melbourne to build the eight-story mid-rise will be transformational for downtown Melbourne and Brevard County.”