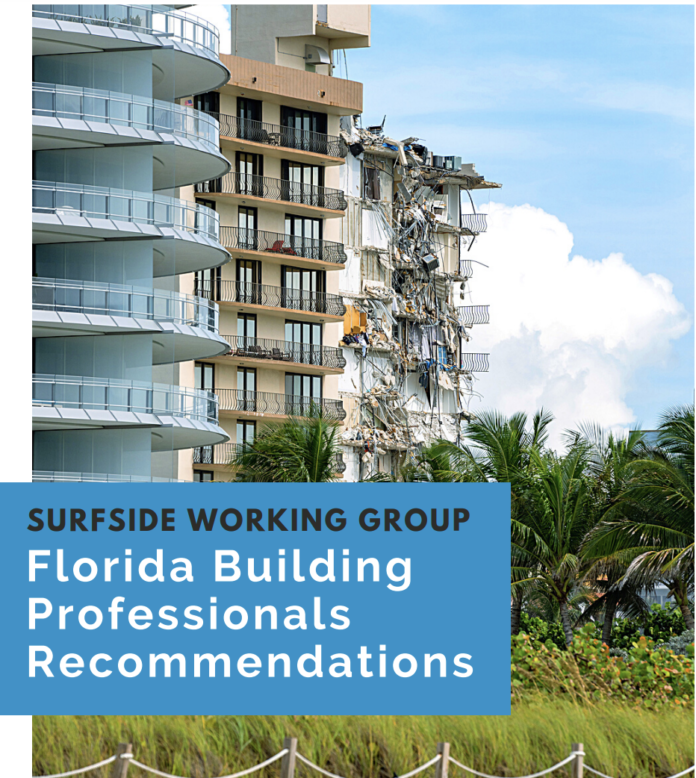 The Surfside Working Group (SWG), a coalition of Florida-based building professionals, has  released a list of recommendations aimed at establishing statewide mandatory structural recertification inspections and whole-building safety inspections in the wake of the July 24 Champlain Towers building collapse..

The group in late October released its nine-page report, Florida Building Professionals Recommendations, to the public, including building officials and jurisdictions. The report recommends structural recertification inspections begin when a building is only 20 years old and repeat every seven years if the building is located in a corrosive saltwater environment.

For buildings a minimum of three miles from saltwater, the inspections would start when the building reached 30 years of age and repeat again every decade.

The goal of these inspections would be to identify problems before they escalate to building failures, says Allen Douglas, the leader of the group and executive director of the American Council of Engineering Cos. of Florida (ACECF), which represents engineering firms, and the Florida Engineering Society (FES), which represents individual engineers.

In a statement, SWG said its coalition of professionals met more than a dozen times over four months. Coalition members include:

Regarding new construction, the report recommends statewide peer review to identify deficiencies in a structural design. “Several localities within Florida, as well as in many other states, require peer reviews for buildings over a certain size, however no such requirement exists statewide in Florida,” says the report.

For structural inspections, the report recommends a visual inspection performed under the direction of a licensed professional engineer or a licensed architect with experience designing and inspecting structures.

At minimum, the inspector should look at garages, pool decks, roof parapets, common areas, unconditioned spaces, accessible exterior areas of the structure—including at least one third of the balconies—and handrails.

If the inspector finds signs of structural distress, a more thorough inspection would be required by a licensed design professional with at least a decade of experience designing structures and five years inspecting structural components of similar building types. The inspection could involve destructive and non-destructive testing, as well as the services of other design disciplines, such as a geotechnical engineer.