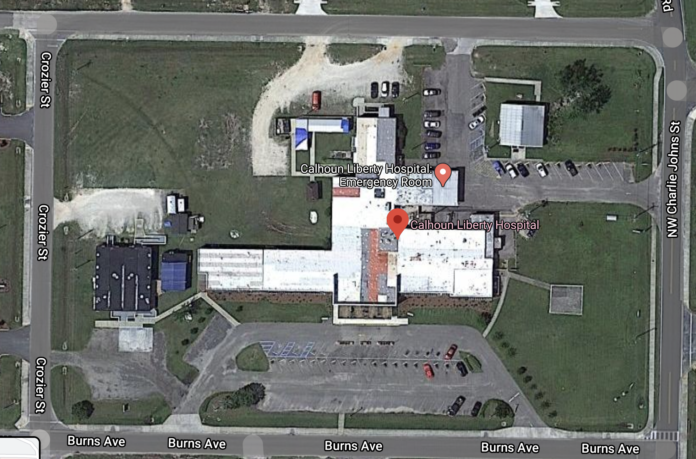 The Florida state government and the Federal Emergency Management Agency (FEMA) are providing $21 million to rebuild and expand Blounststown’s Calhoun Liberty Hospital. The single hospital serving rural Calhoun and Liberty counties had been devastated by Hurricane Michael two years ago.

The hurricane damage reduced the hospital’s capacity from 25 beds to 10, and it still has a temporary roof…

Florida Gov. Ron DeSantis held a press conference at the hospital on Oct. 13 to announce several new state grants toward Panhandle hurricane recovery, which included $10 million from the Florida Department of Economic Opportunity for the hospital, the Tallahassee Democrat has reported.

Earlier, “FEMA came in and inspected the hospital and realized it was not salvageable,” hospital board chairman Mark Plummer told the Democrat. “Had we not gotten the money from FEMA we wouldn’t be able to move forward — so this is huge.” FEMA is providing $11 million in funding.

The new construction plan is still pending approval from the Florida Agency for Healthcare Administration (AHCA).

However,  the federally designated critical access facility’s foundation purchased 15 acres on the southside of Blountstown for the new 77,000-sq. ft. structure, Plummer said. That’s about three times the size of the current hospital, which used to serve as a bomb shelter when it was built in the 1960s.

The construction plan includes hardened features to protect the building from future storm damage. Plummer said construction would begin in about six months, with a projected completion date toward the end of 2022.

The timber industry, one of the largest source of jobs and retirement income in the region, was hit hard after Michael. Plummer and the board hope that the new hospital will generate more jobs for locals in the area both during construction and when it opens, to become “a hub for the entire community and help kickstart the economy,” the published report quoted him as saying.