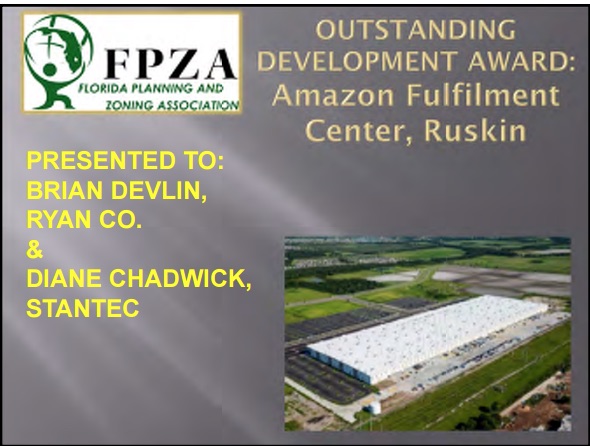 Stantec and Ryan Companies have received a 2015 planning award from the Florida Planning & Zoning Association (FPZA) for “Outstanding Development” on the Amazon Fulfillment Center project in Ruskin, Florida. Amazon won based on the project’s background, innovativeness, and implementation. Award winners were announced at the FPZA’s 2015 state conference held in June 2015, Stantec reported in a news release.

Stantec was the civil engineer, working with Ryan Companies, the business park developer, along with USAA Real Estate Company as the buyer, under the direction of Seefried Industrial Properties, the developer, and Amazon as the end user. The project’s success was due to all team members working together seamlessly with Hillsborough County Government and the Tampa-Hillsborough Economic Development Corporation to adhere to the aggressive fast-track schedule and complete design and permitting within 3.5 months, the news release said.

The end project is a 1.1 million sq. ft. facility located on an 80-acre parcel, near Interstate-75. This $200 million building is used to pack, ship, and store goods from Amazon.