Developers behind a plan for a controversial mixed-use project covering 23 acres on the edge of Miami’s Little Haiti have submitted a ‘“reimagined” and scaled-back, but still massive proposal to the city, but community skepticism and opposition has delayed a decision on the project’s planning approval.

The Miami Herald reported that, after an hour of debate and sometimes acrimonious testimony on June 2, the city’s Planning and Zoning Advisory Board voted 7-3 to once again postpone a vote on the proposed special area plan, originally known as Eastside Ridge but now rebranded as Sabal Palm Village at Flagler Trail, until September.

The board has already deferred a vote on the plan more than a half-dozen times. This time, it decided not to allow New York-based owners SPV Realty to make a presentation on their retooled plan after area residents objected, saying they had not seen it and were not ready to discuss it.

City planners, meanwhile, pushed for a presentation but also asked for a deferral, acknowledging they had not had a chance to analyze it yet, either, The Herald reported.

SPV has been seeking sweeping zoning and land-use changes to raze and redevelop 500 aging apartments at Design Place, a complex dating back to the 1940s that remains relatively affordable in the area near Little Haiti at Northwest 54th Street.

Development proposals cannot proceed until the advisory board either decides to support or object to the project  — its recommendations are not final, but nothing can happen until the zoning board votes.

“But the board has consistently declined to make a final recommendation as SPV and its representatives resisted members’ demands that they hold community meetings, address traffic concerns and look to lessen the project’s impact on adjacent low-scale neighborhoods. SPV sued the board and city to force a vote, but lost in court,” the Herald says.

SVP attorney Melissa Tapanes-Llahues asked the board for an opportunity to present the new plan and get a vote on it so it could move to the city commission. She said the revised plan, she said, is “less intense in all kind of impacts, and the public benefits package is more robust and better spelled out,” she said. “No harm will be done by presenting.”

However, most board members said they preferred to allow members of the public and city planners to digest the changes and be ready to discuss them in one hearing Sept. 14 rather than drag it out in piecemeal fashion. 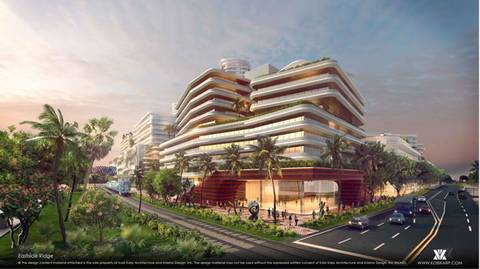 SPV says its changes will reduce heights, scale and massing of proposed buildings. The number of dwellings declines from 3,300 to 2,929 and office space is cut by nearly half from the original proposal for 300,000 sq. ft. Hotel rooms on the other hand are increased from 240 to 400.

Proposed community benefits include a two-acre public park, reconnected roadways now blocked by Design Place’s perimeter wall and a possible vocational or community college facility. “In addition, SPV is proposing to build the first phase of a proposed cycling and pedestrian ‘Flagler Trail’ along the border of its property and the adjacent Florida East Coast Railway line, The Herald says.

The developers also say they plan to provide affordable housing, but the details are unclear.