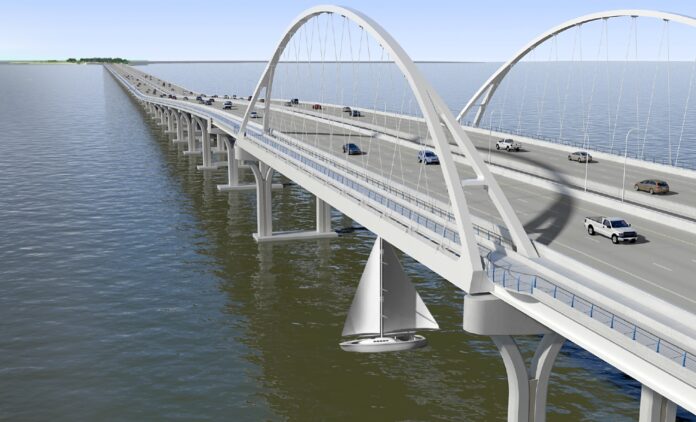 Pile driving for the new $430 million Pensacola Bay Bridge is complete, marking a key step forward in a project stalled in September, 2020 by Hurricane Sally.

Broadcaster WKRG reported that construction crews drove 2,252 concrete piles into the bay floor. Each pile was brought by barge to the project site from the dedicated concrete casting yard on Bayou Chico.

The bridge is expected to be finished by the end of 2022.

Skanska USA is building the bridge and Eisman and Russo Engineering Consulting Co. is overseeing the project for the Florida Department of Transportation (FDOT).

In 2021 Skanska had requested an additional $50 million and an additional 245 days to complete the bridge, to offset damage and delays caused by the hurricane.

Reportedly 27 barges carrying construction cranes, beams and other heavy cargo broke loose during the hurricane, where 100-plus winds drove four of the barges into the concrete structure.

Engineering News-Record (ENR) reported that the accident and subsequent bridge closure prompted 70 lawsuits from Pensacola community property and business owners. Plaintiffs claimed they have suffered economic losses as a result of the bridge’s being closed since the accident, the published report says.