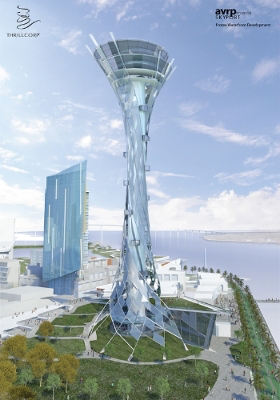 ThrillCorp Inc., which says it is a a developer of uniquely iconic vertical entertainment experiences, is a partner in a consortium called 1HWY1 led by Protea Waterfront Development as the managing member. The winning proposal was one of 11 that the port received for the 70 acre waterfront site.

The port and Protea Waterfront Development are expected to complete final review of the proposal by October, which will begin the development process immediately thereafter.

“I believe this site is unquestionably one of the best waterfront sites in the United States that when completed will redefine experiential urban, mixed-use development and make San Diego a truly world class city,” said Yehudi “Gaf” Gaffen, the spokesman for Protea Waterfront Development.

“The 6-1 vote in favor was a decisive win,” Michael Kitchen, ThrillCorp’s chief development officer, said in a news release. “Our team did a tremendous job assembling and presenting a complete and compelling vision that includes a curated collection of unique land uses in a well-thought out design. The Port of San Diego set a high bar of expectation and we are very grateful to have been deemed to meet it.”

In addition to the SkySpire, the $1.2 billion redevelopment proposal includes a uniquely interactive aquarium, Bayfront beaches, hotels, marinas, retail, dining and other entertainment in a district that makes the most of its waterfront location.

One of the most visible elements of the project is the ThrillCorp SkySpire, a 480-ft tall contemporary tower that is sure to become the symbol most associated with San Diego. Designed by AVRP/Skyport Studios, the SkySpire will be an iconic addition to the San Diego waterfront.

“We are proud to add our tower to the already stunning San Diego waterfront skyline,” ThrillCorp president Bill Kitchen said in a statement.

The company has commenced offering shares to the public under a Crowdfund Regulation A+ offering.