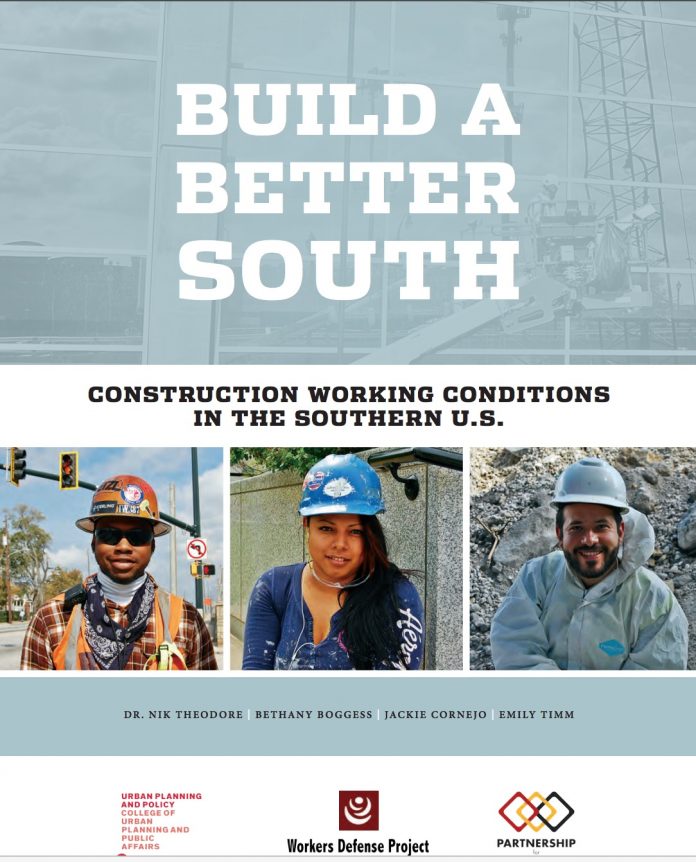 The increased demand for construction has led to higher sales volumes for all construction sectors, and higher profit margins for the residential building sector of the industry.

Unfortunately economic hardships, few or no opportunities for career advancement, unstable work, injuries and even death on the job are commonplace for most construction workers in the South. Health and safety on the job is of particular concern, as the industry has seen the number of injuries and deaths rise with industry growth.

These assessments that I just listed are from a new report, Build a Better South: Construction Working Conditions in the Southern U.S., which examines the working conditions of construction workers in six major cities in the southern U.S.: Atlanta, Charlotte, Dallas, Houston, Miami, and Nashville.

These cities are the engines of growth in the South and are home to some of the largest and most important construction markets in the USA. More than one in four construction workers who are employed in the South are located in one of these six cities, and nationally one in ten workers labor in these six southern cities, the report reveals. This study provides information about the employment experiences of the people most imperative to the industry’s success: the men and women who work on construction sites each day.

Fortunately, there is already a solution that is proven, established, and employable: Supporting the use of union professionals on southern construction projects. It’s a new day in the South regarding unions. We hold ourselves accountable. We work efficiently so that the project succeeds. We’re invested in our community.

Working with a union contractor eliminates the risk of payroll fraud and worker abuse, which the study found rampant in the south. Workers are also protected by an agreement that sets a fair wage, establishes a set of worker rules that both labor and management follow, implements zero-tolerance safety and drug measures, and keeps local money on local projects, thus supporting the local economy.

Union carpenters have trained for several years, for free, meaning they become experts in their industry without having the yoke of a school loan to pay off. That translates into a better quality of life for these professionals and their families. There are more than 20,000 business-oriented men and women – our neighbors, church friends, and baseball coaches – who can give the Southern construction industry the talent is deserves, right now.

As the vice-president of the United Brotherhood of Carpenters’ Southern District and a lifelong southerner and union worker, I ask that we all turn the page and give a new look at union carpenters. I promise you will be pleasantly surprised at what you find. While you’re considering what I’ve said, take a look at this report and see what conditions are currently being chosen, instead.