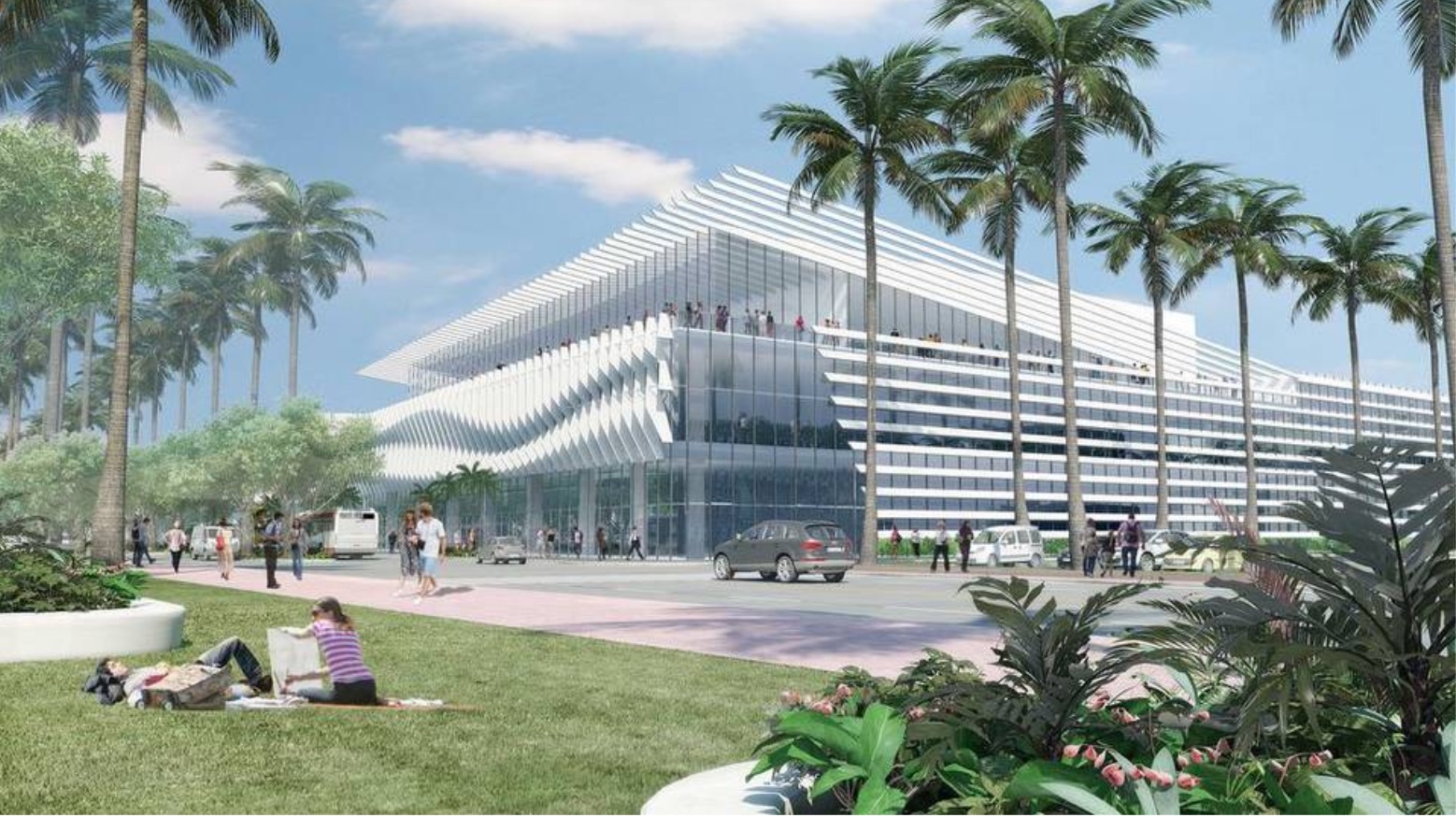 The new $500 million Miami Beach Convention Center is moving towards construction, as the Miami Herald reports shovels will likely be in the ground for the on-again/off-again/on-again project by December.

The scaled-down convention center, an evolution from a much larger public/private hotel/center originally planned but dropped after a contentious election and court case.

The Herald has published an extensive story about the project”

In 2014, a new Miami Beach mayor and three new commissioners led a change in direction: They called off negotiations with ACE, opting to start over. The new approach: Remove retail aspects and decouple the Convention Center re-do from the hotel.

Then Denver-based Fentress Architects, which was on the runner-up team in 2013, got an $11 million contract in April 2014 to design the first portion of the new plans. The architects worked with Miami-based Arquitectonica and Dutch landscape design firm of West 8, which designed the well-regarded SoundScape Park in front of the New World Symphony.

The bidding for the big-ticket project started — a solicitation that saw three of four competing firms drop out before the end. One firm remained: Clark Construction Group, based in Bethesda, Maryland. In January, lack of interest from contractors forced the city to revamp the approach when City Manager Jimmy Morales said the process lacked necessary competition on price.

“It was not going to be transparent enough for us to recommend anything to the commission,” said Maria Hernandez, the project director of the convention center district and the city official overseeing the plan.

Even after the City Commission switched to a construction manager at-risk approach — where the selected company would negotiate a price with the city after putting subcontracts out to bid — only Clark submitted a proposal. All along, a robust building market was blamed for the lack of bidders.

The city has pressed on with the riskier approach, picking Clark to finish designs and use bids on subcontracts to negotiate a final price with the city. Those negotiations continue. Hernandez and Morales will go to the commission in October with a number.

The newspaper reports that Clark has come up with efficiencies in design and construction that will allow the project to sta under the $500 million budget.

Meanwhile, the hotel portion of the project, which must be constructed without any public funds, but still need public vote approval because of its construction on city-owned land, is taking longer to reach completion.

The Herald reports that there was only one finalist after the only other bidder was disqualified because its proposal required public funds for the project.  “The remaining firm: Atlanta-based Portman Holdings, a namesake member of the Portman-CMC team that lost the 2013 bid for the previous redevelopment plan,” the Herald reported.

Portman wants to privately finance a $400 million headquarter hotel with 800 rooms that would rise up 30 stories and connect directly to the Convention Center.

Financing would come solely from Portman through debt and equity, with no public money subsidizing the development. The firm has developed convention center hotels around the globe. But the Miami Beach project added a new layer of complexity to the kind of job the company has already done in locales from Los Angeles to Detroit to Shanghai.

This project requires 60 percent of Miami Beach voters to approve the lease of public land needed to allow Portman to build.

He said being in that position for the first time prompted his company to conduct a public opinion poll to help shape the strategy for garnering support for the project.

The developer has already delayed the vote for four months to have more time to convince enough residents to get behind the project. “Turns out that our strategy became: Well, maybe we need more time,” Portman said.