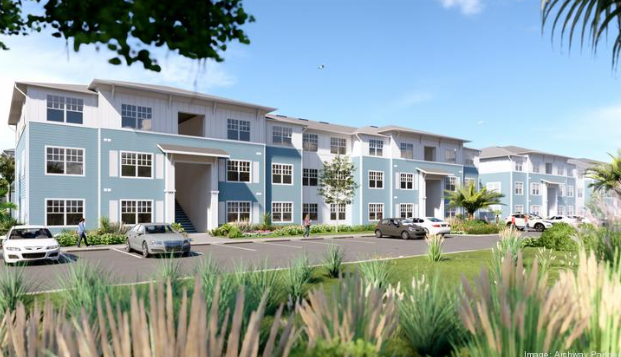 Seminole Square Apartments will have one- and two-bedroom apartments for families and individuals with an income ranging from 30% to 80% of the area median income. This breaks down to an average of $17,300 to $46,000 annual income for an individual.

“Housing is a key priority for the city of Largo — to ensure our residents are offered safe, affordable, quality housing options,” Largo Mayor Woody Brown said in a release. “The groundbreaking of Seminole Square Apartments is an important step in expanding housing access

Three housing developments have been supported by the city of Largo in the past two months.

The 3-acre site is eligible for the Housing Infill Program grant incentive, which aims to “stimulate private development in order to support neighborhood revitalization and new development,” according to city documentation.

The grant provides developers up to $250,000 to build a three-story building with 90 units and an estimated cost of more than $22 million.

“For the West Bay Drive district, for it to be successful, we should incentivize apartments, affordable housing apartments as opposed to condos, which are more typically … seasonal,” Mayor Woody Brown said.

On Nov. 15, commissioners supported a Habitat for Humanity plan to build an owner-occupied townhome development on a 6.82-acre site.

Habitat requested and received an affordable housing density bonus for an additional one unit per acre to increase the total units from 51 to 54 units in the development.

To secure the bonus, Lantower must achieve a Silver level of Leadership in Energy Efficient Design (LEED) or National Green Building Standard (NGBS) certification prior to the city issuing a certificate of occupancy.