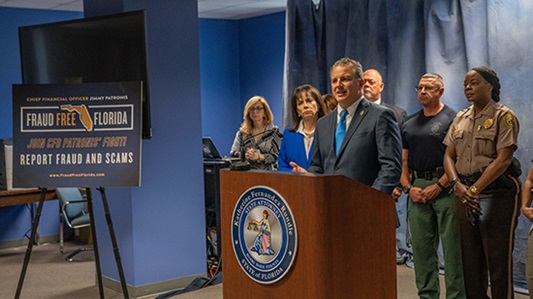 Florida Chief Financial Officer Jimmy Patronis has announced the arrest of Wyatt Green, the owner of Storm Restoration Specialists in Jacksonville, for allegedly stealing more than $40,000 from consumers who assigned their insurance benefits to him through Assignment of Benefits (AOB) contracts.

Green and his staff allegedly forged customer signatures on construction documents and insurance claim payment checks that required signatures from both the homeowner and mortgage lender.

An AOB gives a third-party authority to file a claim, make repair decisions and collect insurance payments without the homeowners’ involvement.

“This case is another example of a bad contractor scamming Floridians and pocketing the money without actually making repairs. AOBs were once used to protect Floridians but recently, assigning your benefits over to a contractor has become an abusive practice,” Patronis said in a statement.

“When they hire a company, consumers should have peace of mind that work is being completed and not have to worry about being left high and dry by a contractor. My detectives work hard every day to find these criminals and stop them from preying on homeowners,” Patronis said.

Patronis’ team discovered that Green was hired by four homeowners to perform contracting work. Green’s office would directly receive insurance checks that required three signatures—one from the homeowner, one from the mortgage lender, and one from Storm Restoration Specialists.

Allegedly, Green directed his staff to forge homeowners’ signatures on the checks as well as added the mortgage lenders’ endorsement before depositing the checks into his bank account. The investigation revealed that Green and his employees purchased 58 false bank endorsement stamps from a online manufacturer to aid in this scam.

Employees of Green also admitted to allegedly forging customer signatures on construction documents required by counties and municipalities. In some cases, construction work was never completed, and in others the work never even began.

Green was booked into the Duval County Jail on April 12 on charges of Organized Scheme to Defraud, Grand Theft and Forgery. If convicted, he faces up to 35 years in prison.