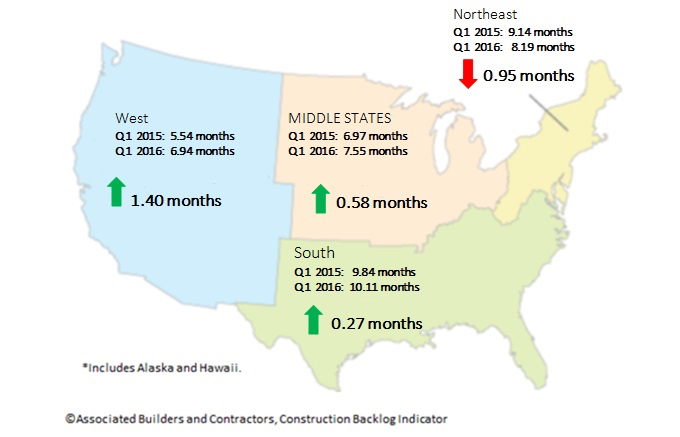 Construction backlog among the nation’s largest contractors now stands above 12 months, a record for the series, according to Associated Builders and Contractors (ABC). The biggest firms with the greatest capacity to attract talent have been able to accept work that others have to turn away in a market that has stabilized at a comfortable level but still faces a skilled worker shortage.

Nationally, ABC said its Construction Backlog Indicator (CBI) inched down to 8.6 months during the first quarter of 2016, which represents a decline of 0.8 percent from 2015’s final quarter. CBI has expanded by 2.7 percent on a year-over-year basis, however, which translates into an increase of more than 0.2 months.

“Contractors are no longer becoming busier, rather, the level of activity has stabilized at a reasonably high level,” said ABC chief economist Anirban Basu. “Most contractors continue to express satisfaction regarding the amount of work they have under contract. This is of course truer in certain parts of the nation than others.”

“Subcontractors are much busier than they were several years ago, with general contractors reporting greater difficulty securing experienced contractors,” said Basu. “Some construction firms are turning away work for the first time in years. “The recent stabilization of backlog may reflect supply constraints as much as demand stagnation.

“That said, there are indications that certain commercial real estate segments are nearing the end of their development cycle,” warned Basu. “Developers, bankers and regulators have become generally more concerned by the possibility of overbuilding in hotel, office and retail markets. Many developers indicate that the current cycle is much closer to its end than to its beginning. The implication is that for the first time in years, backlog may be poised to decline after recovering massively since early 2010.”

Backlog in the Middle States rose briskly during the year’s first quarter. While diminished energy-related activity in North Dakota and other Middle State communities had been constraining regional backlog, industrial markets like Minneapolis and Detroit have begun to hum. That has helped push backlog in the Middle States to roughly 7.6 months, the highest level on record. Foreign investment in industrial construction projects and in purchasing industrial assets has been particularly apparent over the past year. The ongoing strength of the domestic auto sector represents a primary driver.

The South continues to report the lengthiest backlog on average. Regional backlog declined, however, during the first quarter, and is now back to third quarter 2015 levels. Still, many contractors in the South can look forward to many months of continuing activity.

Contractors in the South have reported average backlog in excess of 10 months for three consecutive quarters. This is unprecedented in the history of the series, with no other region accomplishing this.

Backlog in the Northeast is no longer expanding, but remains above eight months, second only to the South. The Northeast continues to experience a considerable volume of activity related to commercial development, including in the form of fulfillment centers that exist at the heart of the e-commerce economy.

Backlog in the West slipped during the year’s initial quarter. Technology continues to generate profound levels of activity in markets like San Jose, Seattle, and San Diego, but firms working in infrastructure categories have tended to report shorter backlog than their counterparts elsewhere. Not surprisingly, California-based firms heavily influence western backlog, and that market is positioned to remain active with respect to the level of private construction.

Backlog in the commercial/institutional category has barely shifted over the past year. That’s good news since contractors in this segment remain busy and there has yet to be any indication of a meaningful decline in contractual activity. The same can be said for the heavy industrial segment, where backlog has hovered around seven months for more than a year. While infrastructure-related backlog declined during the year’s first quarter, it has been above 11 months for two consecutive quarters, which has never occurred in the history of the series.

The passage of the FAST Act and growing focus among many state and local government policymakers should allow backlog in the infrastructure category to remain elevated.

Commercial/institutional backlog has remained above eight months for three and a half years. Though the Great Recession was jarring, the level of market stability has been simply remarkable since mid-2012. While higher education is not generating as many large-scale projects as in years past, many institutionally oriented contractors continue to report significant work flowing from the healthcare sector.

The heavy industrial category continues to be stable, with backlog remaining around seven months. Major sources of work include the auto sector, aerospace and chemicals.

Backlog among the nation’s largest contractors now stands at 12.25 months, surpassing the record of 11.8 set in the previous quarter. These firms have benefitted from large, signature projects in various parts of the nation, which has helped them recruit workers in an industry hungry for human capital—and take on more work.

Though backlog declined during the first quarter among firms with annual revenues between $30 million and $50 million, it remains in the range of 11 months. This represents the third-highest reading in the history of the series.

Firms with less than $30 million in annual revenue have collectively reported backlog in excess of seven months for 11 consecutive months. Subcontractors continue to be busy on average according to the CBI survey, though backlog among this group has not been rising significantly recently.

After many quarters of steady or lengthening backlog, average backlog surprisingly declined among contractors with annual revenues between $50 million and $100 million. Market share shifted to the largest contractors, perhaps because larger contractors are more easily able to compete away project managers and other key contributors.

Agrihood project ‘The Grow’ approved by Orange County’s board