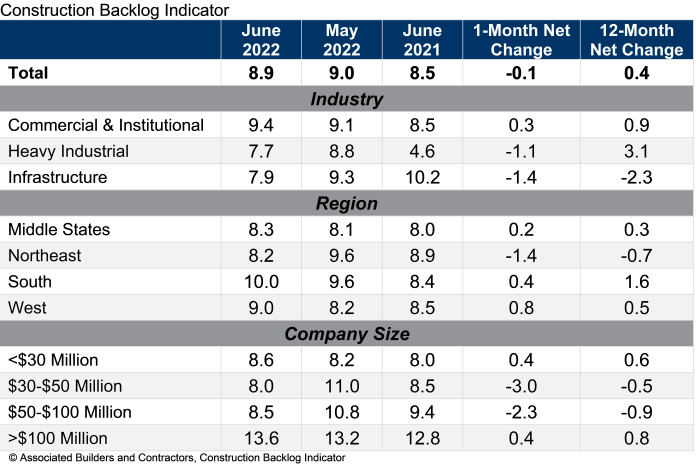 Associated Builders and Contractors (ABC) says its Construction Backlog Indicator fell 0.1 months in June and stands at 8.9 months, according to an ABC member survey conducted June 21 to July 5. The reading is up 0.4 months from June 2021.

“Several months ago, there was conjecture that contractors were generally too upbeat regarding their collective future,” said ABC Chief Economist Anirban Basu. “Increasingly, the data suggest that they were. At the time, many contractors reported surging backlog and an ability to pass along hefty cost increases to project owners. For months, contractors expected sales, employment and margins to expand. The most recent ABC survey indicates that, to secure work and to induce project starts, a growing fraction of contractors is having to trim margins.

“While circumstances are hardly catastrophic, the nonresidential construction marketplace is not as strong as it was expected to be,” said Basu. “Many factors are involved, including materials prices that have remained stubbornly elevated and construction skills shortages that have refused to dissipate.

“In the context of rising fears of recession and rising borrowing costs, the stage has been set for softer nonresidential construction activity going forward,” said Basu. “That said, public contractors can expect to remain busy in the context of a significant infrastructure spending package. Still, the market may not prove as robust as anticipated given delayed project start dates as public agencies determine the right moment to purchase construction services. Despite all of these considerations, contractors continue to expect industry sales and employment to expand over the next six months.”