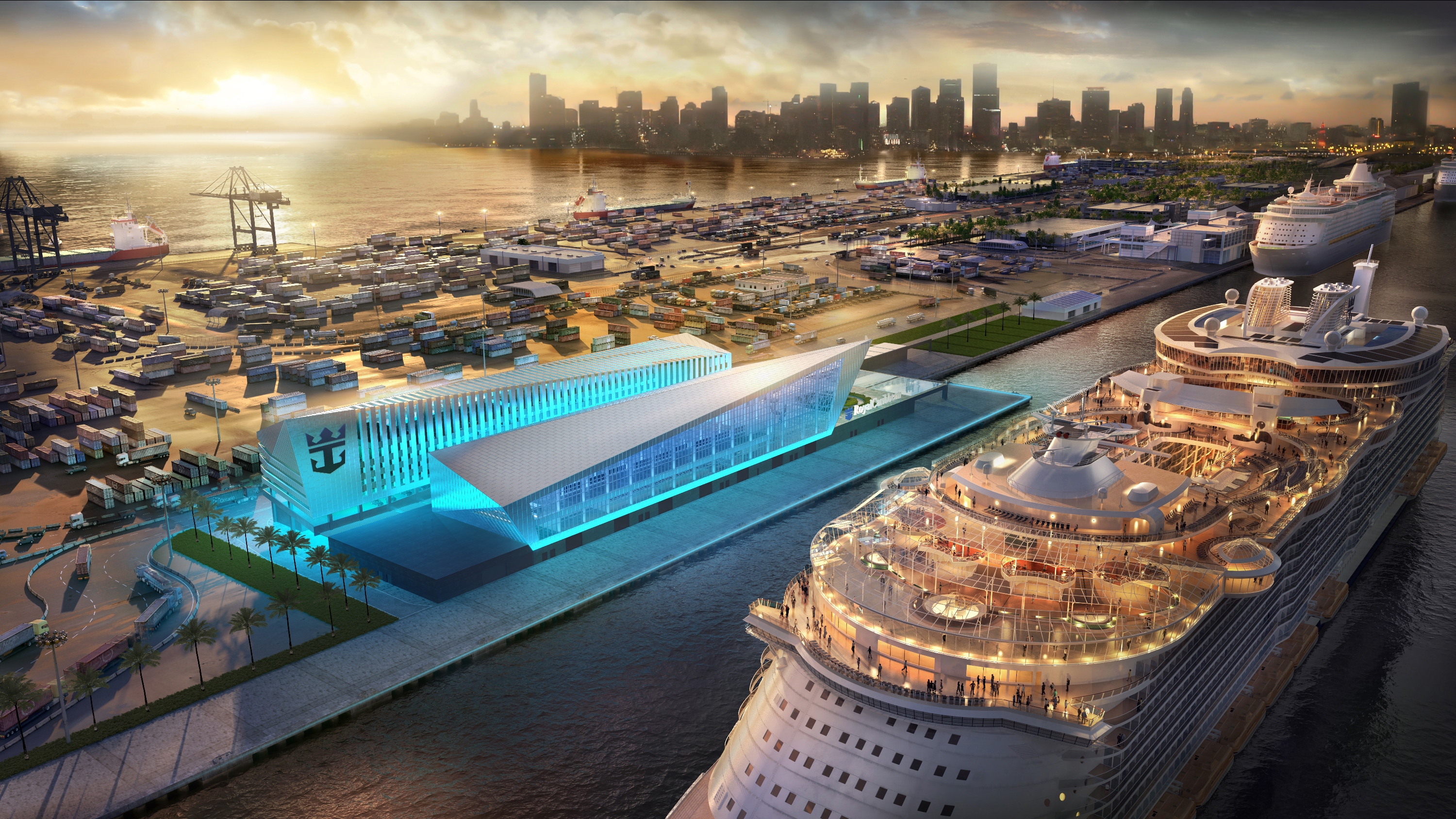 U.K and Singapore.-based Broadway Malyan has been appointed by Royal Caribbean Cruises Ltd. to design its new $100 million cruise terminal in Miami.

The proposed ‘gateway to Miami’ will see the creation of a new icon on the waterfront and serve the largest cruise ships in the world.

The terminal has been nicknamed the ‘Crown of Miami’ because of its shape which evokes the points of the symbolic headgear when viewed from the water. From the eastern or western approaches the ‘M’ of Miami is communicated, and when viewing the terminal side-on a sense of waves rising or ships passing is revealed.

“Our aim was to create an iconic destination and arrival experience for passengers, which provides a great experience from curbside to ship in an innovative and modern cruise terminal,” Broadway Malayan director Ian Simpson said in a news release.

“The terminal extends along the waterfront to maximize views of the ships when docked, and the sides of the building have been angled to reflect the water and provide the terminal’s unique shape which echoes the Royal Caribbean brand.

“We have worked very closely with Royal Caribbean to develop a design that both has the ‘wow’ factor and will operate efficiently as an innovative cruise terminal.”

The proposals centre on making the most of the arrivals experience. The building profile has been designed to provide a dynamic addition to the port and clear views are prioritised via the inclusion of deliberate void space to ensure that passengers have the impact of seeing their cruise ship as soon as they approach the terminal.

At night the façade will be lit ensuring that the building makes an impression.

It is the first time that Broadway Malyan has been appointed to deliver a project in North America and Ian argues it marks a positive step for the firm.

He added: “Winning this competition is a major coup for our practice and it represents a fantastic opportunity for us to expand into a new part of the world.

“We will have staff based in Miami supported by our Singapore studio, supplying Royal Caribbean with round the clock service and ensuring that we can provide an integrated service with our architecture, masterplanning, landscaping and branding teams available at all times.”

The brand element of the pitch played an important role in the win, and has helped to deliver a design which will effectively communicate Royal Caribbean’s brand. Jon Geaney, director at Broadway Malyan, was responsible for this part of the pitch.

“The driving force was to integrate Royal Caribbean’s brand with the building’s concept, in a subtle yet effective way,” he said.

“We worked closely with our architectural team to ensure that each aspect complemented the other, and by doing it in this way, we differentiated ourselves from the competition.

“Through regular liaison with Royal Caribbean, we gained a deep understanding of their values and identity. We knew that the right design would enhance their image and deliver something special that would communicate their ethos against the wider context of Miami’s culture and spirit.”

The design incorporates a number of sustainability focused enhancements to reduce its environmental impact including rainwater collection and recycling so that it can be used for cooling, toilet flushing and irrigation.

The design and materials have been chosen with efficiency and cost in mind. Using a simple prefabricated frame, prefabricated flooring panels, and a repetitive system, the core of the building can be constructed quickly.

Steel beams will form the shape of the building’s profile and the roof will be clad with waterproof aluminium.

The main glazing wall faces north to maximise views and energy efficiency. The south side of the scheme forms a car park with 1,000 spaces, loading bays, and passenger drop offs (including taxi and bus stops) at every level to keep traffic moving. Aluminium fins and spacing enable ventilation for the parking levels and M&E spaces below and the car park forms a buffer between the terminal building and the noise and views of the shipping port next to the site.

Subject to planning approval the terminal construction will begin Q1 in 2017 and is expected to be operational by Q4 2018.