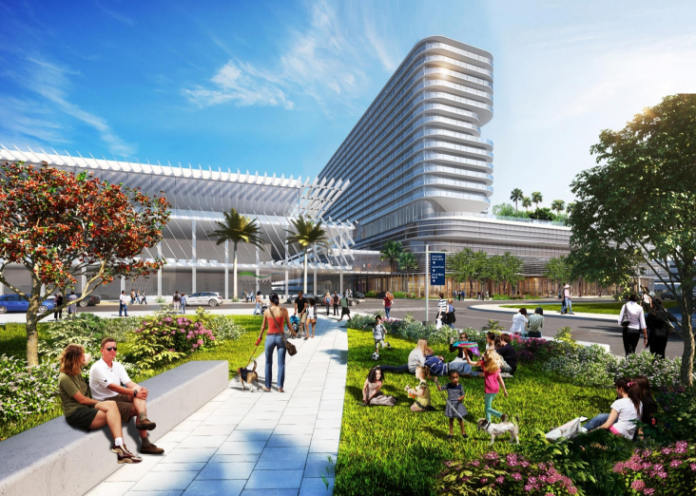 “A project of this magnitude and significance requires the best in-class team and we are thrilled to have Balfour Beatty onboard leading the construction efforts,” said developer David Martin, CEO of Terra, and Jackie Soffer, chairman and CEO of Turnberry.

“The firm’s extensive experience pioneering new technologies and transforming communities through smart infrastructure aligns with our goal to deliver a hotel that will transform the convention center campus into one of the most desirable meeting and convention destinations in the world.”

“This is a beacon development for Miami Beach,” Scott Skidelsky, Balfour Beatty president in the Southeast, said in a statement. “Balfour Beatty’s national operations started its roots in South Florida and being a part of the community is a point of pride for our company. Being chosen to construct this icon project means the world to our project team who are some of the best builders in the industry and they are all so excited to work with our stakeholders to make this an incredibly successful build experience.”

An elevated skybridge will connect the hotel and Convention Center.

Grand Hyatt Miami Beach will be designed by architect Bernardo Fort-Brescia and Miami-based Arquitectonica. The team also includes Stonehill Taylor, a New York City based hospitality-focused architecture and interior design firm in charge of designing the hotel’s interior lobby and lounges, ballroom, meeting and hotel rooms, and all common areas; EoA, a local architecture, interior design and landscape firm will design the pool deck; and Arquitectonica GEO, who will create the pedestrian promenades and landscapes.

The project’s resiliency and sustainability features include storm water management and reuse, flood risk mitigation, and the use of solar power.