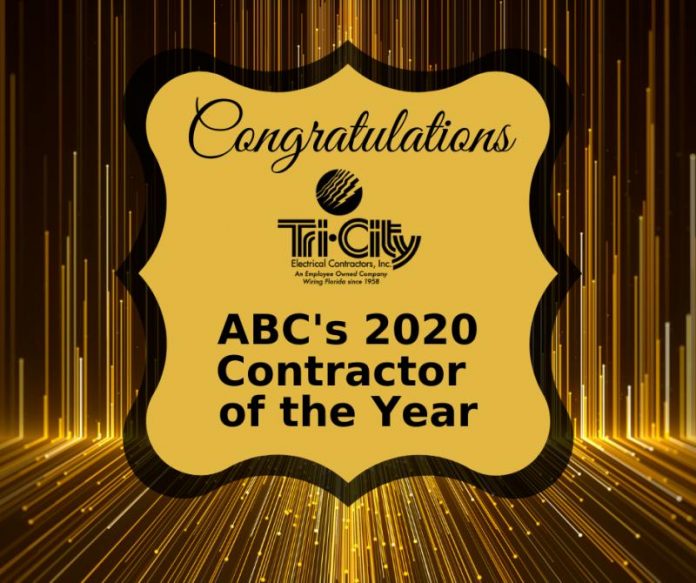 Associated Builders and Contractors (ABC) has named Tri-City Electrical Contractors Inc. headquartered in Altamonte Springs, as its 2020 Contractor of the Year, an award that the association says recognizes companies for corporate integrity, commitment to safety, professional development and expert craftsmanship.

The award will be presented at the 30th Annual Excellence in Construction Awards Gala during ABC Convention 2020 in Nashville, TN on Aug. 18.

“It’s an honor to recognize Tri-City Electrical Contractors and their 60-plus years of contributions to the merit shop construction sector with this esteemed award,” said 2020 ABC national chair Tim Keating, owner and president of R.C. Stevens Construction Co., Winter Garden. “With utmost dedication to workforce development, job site safety, and project excellence, Tri-City has been a leader at the local, state, and national level for decades. It’s an honor to present the entire Tri-City team with this well-earned award.”

ABC says the company has also achieved the high marks that qualify it as an ABC Accredited Quality Contractor, won a number of state and local ABC Excellence in Construction Awards, and ranked No. 25 on ABC’s 2020 Top 200 Performers.

As an employee-owned company, Tri-City encourages its more than 800 field and support staff to invest in the success of the company, the well-being of its people and the future of the entire industry.

Tri-City Contractors was founded in 1958 and has additional offices in Tampa, Fort Myers, and Pompano Beach.