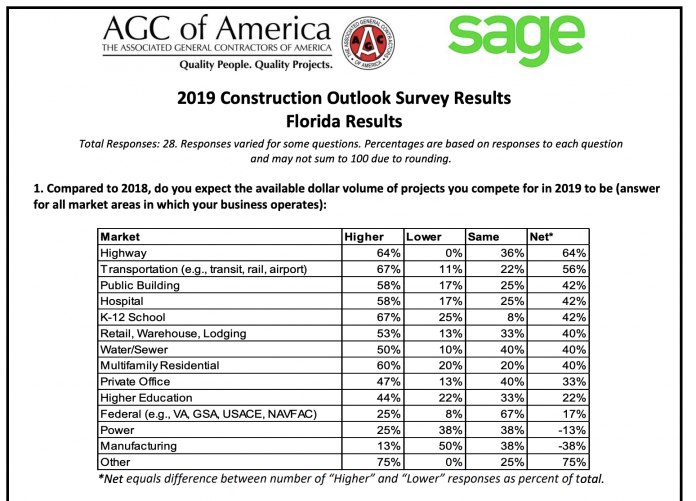 The vast majority (83 percent) of Florida contractors expect to increase their payrolls in 2019, but almost all are worried about finding the workers they need.

Half of the Florida companies intend to increase staffing by as much as 10 percent, and 13 percent said they will be expanding their workforces by at least 25 percent, the Associated General Contractors of America (AGCA) reported in the annual construction outlook survey released on Jan. 2. No Florida contractor expected to reduce its workforce, according to the survey.

At least 79 percent of the contractors said they expect to have a hard time filling some or all positions, and nearly a third say the industry’s labor shortage will be worse this year.

The number of construction workers employed in November in the Sarasota-Manatee market grew by 1,700, or 7.2 percent, to 25,300 year over year. However. hundreds of positions remain open, and the region remains well under the construction workforce peak of 31,800 in April 2006.

“There will be a labor shortage for a long time,” Jon Mast, CEO of the Manatee-Sarasota Building Industry Association, was quoted as saying by Sarasota Herald-Tribune. “We have a national problem and a local problem. It’s slowing up production of housing.”

“Construction executives appear to remain confident about their market prospects for 2019 and plan to add headcount to cope with the added workload,” said Stephen E. Sandherr, the AGC’s CEO. “Even as they are optimistic about growing demand, contractors are concerned about finding qualified workers to execute projects.”

Overall in Florida, 71 percent of the construction firms said they increased base pay rates or provided incentives or bonuses to help fill vacant positions in 2018.

Nearly a third of those firms said projects took longer than expected last year, and 26 percent said costs were higher than anticipated.

The Florida companies anticipate higher dollar volume this year in such construction projects as airports and transit, elementary and high schools and multi-family residential. Some slowdown was forecast in building for manufacturers and power companies.

Nation-wide, the percentage of respondents who expect a market segment to expand exceeds the percentage who expect it to contract for all 13 categories of projects included in the survey. For every segment, between 23 and 32 percent of respondents expect the dollar volume of projects they compete for to increase. Meanwhile, for all but one segment, between 11 and 16 percent of respondents foresee less work available in 2019. The difference between the positive and negative responses – the net reading – was between 10 and 17 percent for every category except multifamily.

Despite firms’ plans to expand headcount, 78 percent report they are having a hard time filling salaried and hourly craft positions. That share was down slightly from 83 percent at the start of 2018. In addition, 42 percent expect it will continue to be hard to hire in the next 12 months and 26 percent expect that it will become harder to hire in 2019.

These labor shortages are having an impact on construction costs and project schedules, association officials noted. One-third of respondents report that staffing challenges drove costs higher than anticipated. In reaction, 37 percent of firms are putting higher prices into new bids and contracts. Similarly, 34 percent report projects have taken longer than they anticipated.

Many firms are also investing more in training programs for current and new workers, association officials added. They noted that 63 percent of firms report they plan to increase investments in training and development in 2019, up from 52 percent at the beginning of last year. Large firms, in particular, are likely to do so, with 71 percent of companies with more than $500 million in revenue saying they plan to increase investments in training, compared with 59 percent of firms with $50 million or less in revenue.

“As growing demand and labor shortages force contractors to do more with less, many firms are increasing their investments in labor-saving technologies and techniques like building information modeling, lean construction and robotics,” said Ken Simonson, the association’s chief economist. He noted that 32 percent of respondents report their firms are using methods to reduce onsite worktime, including lean construction, virtual construction techniques or offsite prefabrication. Twenty-eight percent are investing in labor-saving equipment, including drones, robots and 3-D printers.

The data indicates that 42 percent of respondents will increase their IT investments in 2019. The largest share of firms, 30 percent, plan to increase their investments in project and document management software. Firms also appear to be increasingly comfortable with moving data to the cloud. Thirty-one percent said they are very comfortable with such a step, compared with 24 percent last year. Yet even as firms embrace information technology, 26 percent report their biggest IT challenge is that they lack the time needed to implement and train on new systems.

“Contractors are realizing that IT is becoming more diverse and are considering services outside their companies that can do a better, more cost-effective job at managing this important component of their business,” said Dustin Anderson, vice-president of sales for Sage Construction and Real Estate, North America.

Association officials noted that despite the headwinds of political partisanship and ongoing trade disputes, contractors are optimistic about demand for construction services in 2019.

But they noted that the outlook is based on responses that were provided before the recent partial federal government shutdown. And responses were provided at a time when President Trump had announced a halt to pending tariffs on a wide range of Chinese goods as negotiators seek to address trade concerns.

“This means that if Washington officials can’t find a way to work together to continue needed regulatory reforms and enact new infrastructure funding, many contractors’ more optimistic expectations will not be met,” Sandherr said. “And many contractors will be squeezed by growing costs for materials at a time when an expanded trade war will likely undermine private-sector demand if American and Chinese officials cannot resolve their trade disputes.”

“Our goal is to ensure that the construction industry expands in 2019 amid growing demand for new projects and an infusion of new and qualified workers,” Sandherr said. “If that happens, the entire economy will benefit.”

The outlook was based on survey results from more than 1,300 firms from 49 states and the District of Columbia. Varying numbers responded to each question. Contractors of every size answered over 20 questions about their hiring, workforce, business and information technology plans. 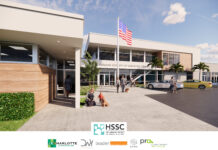 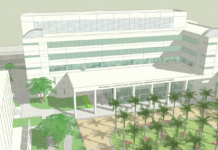