Developers have broken ground on a $106 million redevelopment project in Miami, which they describe as the largest qualified opportunity zone affordable housing project in the nation.

The three-tower Allapattah project by Related Urban Development Group (RUDG) surpasses others in terms of unit count (383) and development cost, the developers say.

Miami-Dade County Mayor Carlos A. Gimenez, chairwoman Audrey M. Edmonson and Ben Carson, secretary for the US Department of Housing and Urban Development, attended the groundbreaking event on Aug. 19 for Three Round Towers B&C and Brisas del Este. 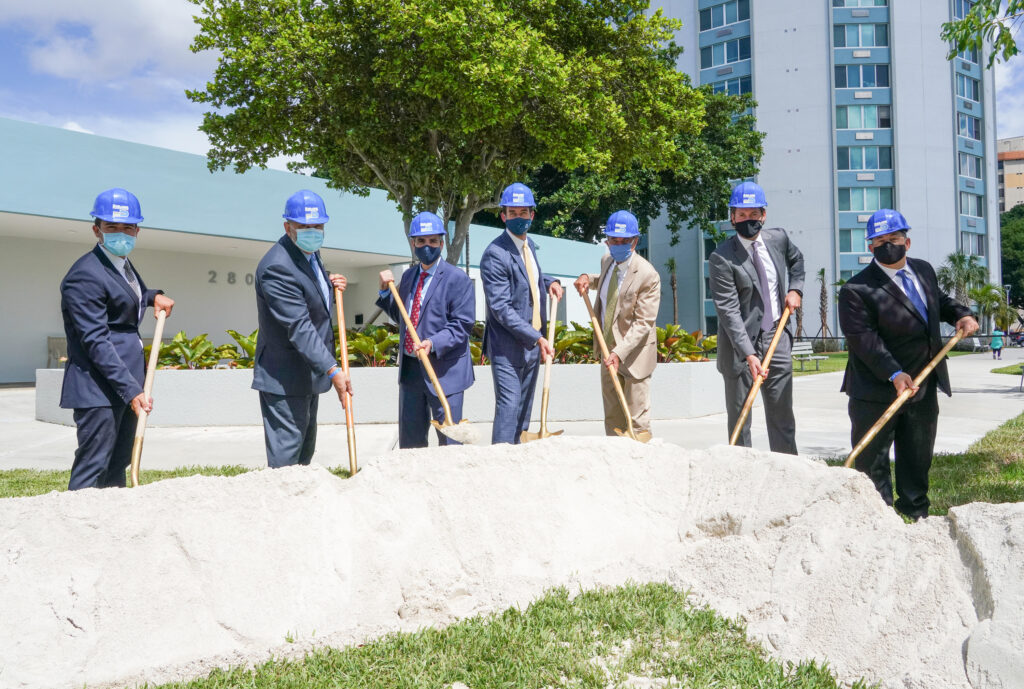 The Three Round Towers development was originally built in 1970 on approximately 6.98 acres and included three towers (Towers A, B and C), a community center and parking for residents. Tower A was substantially renovated in 2018 by Related Urban. The current renovations are focused on the major rehabilitation of Towers B and C along with the construction of Brisas del Este, a new 120-unit affordable housing project. RUDG, the affordable housing arm of developer Related Group, will serve as Miami-Dade County’s developer partner.

The projects will serve residents from 30% area median income (AMI) up to 80% AMI and will be completed in the beginning of 2022.

The total development cost for the three buildings is more than $106 million. The layering of financing makes this development the largest of its kind in the nation utilizing Opportunity Zone Funds ($24 million) in combination with other federal and HUD resources, such as Low-Income Housing Tax Credits (LIHTC), Rental Assistance Demonstration funding (RAD), Home Investment Partnerships (HOME) from the City of Miami, and a Purchase Money Mortgage (PMM) of $18 million from Miami-Dade County to the developer, the developers said in a statement.

County and State surtax funds are also being invested in the project. More importantly, the Opportunity Zone investment of $24 million was made personally by Related Group CEO Jorge M. Peréz.

“By fully leveraging multiple financing sources, our county is paving the way more for smart projects that create vital affordable housing for our residents,” Mayor Gimenez said in a statement. “Miami-Dade’s public-private partnership with Related Urban Development Group has been a key component leading to the success of this particular project, and I look forward to the County’s continuing wise use of P3’s moving forward.”

“The redevelopment of Three Round Towers and the addition of Brisas Del Este leverages the widest range of financing available in affordable housing development,” said RUDG president Albert Milo, Jr. “It is truly a first-of-its-kind project made possible by our partners at the County, who we have worked with over a dozen times to create transformative affordable housing solutions across Miami-Dade. Through collaborations like this, we are able to continue making a real difference for the residents of the communities we build in.”