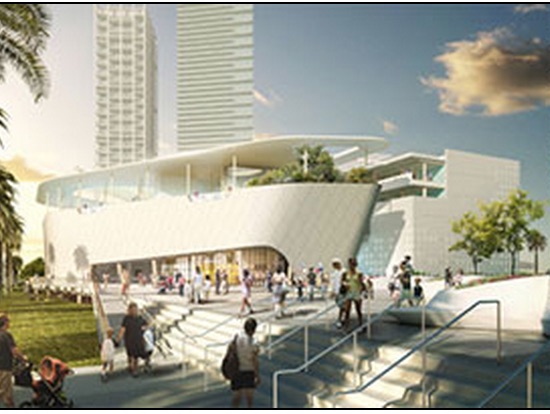 Miami’s new Patricia and Phillip Frost Museum of Science announced a fundraising milestone in August, reporting it had received $103 million in donations.

The funds, combined with $165 million granted by Miami-Dade County’s Building Better Communities Bond Program, bring the project within arms reach of its $300 million total cost, The Real Deal has reported.

“Construction of the building is also making progress,” the website reported. “The massive 500,000-gallon Living Core Aquarium topped off last month, and a total of 70 pumps and filtration systems have been installed throughout the museum for its many aquariums.”

The new museum, located on a four-acre site next to the Perez Art Museum, is expected to open during summer 2016.

The project ran into complications in 2014 when previous contractor Suffolk Construction was replaced mid-job by Skanska USA.

Skanska signed a $101 million contract to complete the museum in late 2014.

“We have been working with Skanska for seven months, and we’re pleased with the progress,” Gillian Thomas, the museum’s president and CEO, in a news release. “While we still have work to do with the building and exhibitions, our new facility is quickly advancing in the heart of downtown Miami. We can now begin to envision our completion and the impact this museum will have on the region.”

In May 2014, the Miami Herald reported that Skanska had been asked to replace Suffolk Construction on the job. “We just felt the decision was in the best interest of the project after a long and careful process and a lot of reflection,” Thomas was quoted as saying.

The newspaper said Thomas did not reveal the issues that led to the termination, but monthly progress reports to the county show signs of strain with Suffolk emerging as far back as a year ago.  There were concerns about brick-and-mortar challenges with walls, columns and slabs of the complex project.

Jeffrey A. Gouveia Jr., Suffolk’s executive vice-president, was quoted as saying problems arose due to design deficiencies that repeatedly forced the company to turn to architects for additional information before they could proceed.

Gouveia said those issues led an eight-month period at the Museum Park site last year when “virtually nothing” got done.

“It just took quite a while for a lot of these issue to be resolved so that we would actually get something we could build,” he said.

The newspaper quoted local architect Raul Rodriguez, principal of Rodriguez & Quiroga, as saying: “There is a tri-partite effort: owner, architect, contractor. The owner decided to terminate the contractor.”