Amazon has acquired nearly 30 acres of land in Tallahassee, about 15 miles from the construction zone of another of the online retailer’s sites of what will become its capital city fulfillment center. The land will be used for a massive “Project Cypress” center.

The Tallahassee Democrat reports that property records  show the world’s largest online retailer paid $3.4 million the additional parcel of land on the southside of Northwest Passage off Capital Circle Northwest near Home Depot.

This is separate from another fulfillment center project, described as “the biggest economic development project in the city and county’s history.”

The latest land deal closed on Sept. 28, deed materials show, but details are scanty about how Amazon will use the land. Permit materials indicate the proposed project is seeking approval to develop 10 parcels of land, the newspaper reported.

“The development of the site will be completed in one phase and is proposed to include one building, a total of 123,115 square feet and a maximum of 32 feet in height (one-story),” documents said. “The building will include approximately 12,000 square feet of office space and the remaining building space will be utilized for housing products and goods.”

A City of Tallahassee permit agenda released on Oct. 11 indicates that the Amazon property is connected to “Project Cypress,” described as a warehouse on 47.80 acres.

The Tallahassee-Leon County Office of Economic Vitality regularly assigns pseudonyms to projects that may create a significant number of jobs and require incentives to seal the deal. It is unclear what type of incentives may be involved with Amazon’s expansion.

“Project Cyprus is an active confidential project we are working on,” Cristina Paredes, director of the Tallahassee-Leon County Office of Economic Vitality (OEV), told The Democrat.

“I can confirm Amazon purchased that land out there,” she said. “However, what they plan to do with that land that’s part of their strategic acquisition as they move forward is not something I can comment on at this time.”

The latest Amazon acquisition involves about 18 acres that are currently under contract that are next door to the 30 acres Amazon recently purchased, the newspaper reported. “It wasn’t immediately clear if the company is purchasing that land, too — although that appears to be the case based on the permit application.”

Amazon began construction this summer of a massive robotics fulfilment center on 170 acres at 6720 Mahan Dr. The company had purchased five parcels for $22.7 million from Tallahassee businessman DeVoe Moore, owner of the Tallahassee Antique Car Museum. 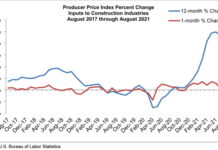 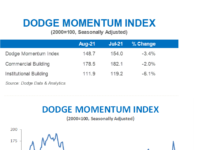 Florida near the middle of the nation for COVID-19 construction employment losses: AGC