The District Community Development District (CDD) has closed on a $35.6 million bond issue to make the way for construction of infrastructure improvements.

In addition, The Elements Development of Jacksonville, an entity managed by Preston Hollow Capital, will convey approximately four acres of waterfront property to the City of Jacksonville to be used for public park space and a substantial Riverwalk extension.

To prepare for vertical construction, the CDD will use the bond proceeds to install public utilities and stormwater management facilities for both the public space and roads; provide new school board parking, marina/riverfront parking and public use parking areas; and construct roads to facilitate private development of individual parcels.

On behalf of the city and Downtown Investment Authority (DIA) – acting as the Southside Community Development Agency – the CDD will also make bulkhead improvements, extend the Riverwalk, install an overland trail and construct a boardwalk over the natural marsh area. With a budget of $23 million, the DIA project constructed by the CDD will also develop three riverfront parks, construct floating docks, add a water taxi stop and kayak launch and provide park access via the extension of Prudential Drive, Broadcast Place and new roadways.

The District 30-acre development is located on the Southbank at the former site of JEA’s Southside Generating Station. 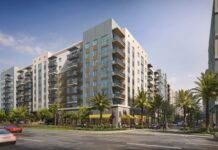