The City of Miami Beach has announced that South Beach ACE – a team including OMA, Tishman Realty and UIA Management – is the winner of the Miami Beach Convention Center redevelopment competition. OMA’s design will transform Miami Beach’s convention center into a 21st century facility, adding an 800-room hotel, new ballroom and meeting facilities and a large public park, while reducing the overall footprint of the site and creating new connections with the urban fabric of Miami Beach.

Shohei Shigematsu, director of OMA New York and lead designer, said: “We are thrilled to be chosen to develop one of the most significant urban districts in the US. Our design will reintegrate Miami Beach’s vital convention center with its neighbors, offering new facilities as well as amplifying the character of this exciting city.”

While the convention center is a valuable cultural and economic asset for Miami Beach – it is the venue of Art Basel Miami Beach, the Miami International Boat Show, and other major events – it has become in recent decades a physical and social barrier within the city, with huge parking lots, closed facades and under-utilized urban space. To undo this situation, South Beach ACE engaged with local communities from the onset of the seven month design competition.

The design conceptually rotates the convention center, enabling strong east-west neighborhood connections through the site, running from the beach to the city. With loading consolidated to the north, and the new concourse and main entry located on the south, the building has a clear face to Lincoln Road, while maintaining access on the east side for visitors walking from the nearby beach hotels. The center will be set back from Washington Avenue, reducing the building’s footprint on the ground, and allowing a porous façade so that events inside the center can move outside.

Rather than expanding the mass of the convention center further into the city, a new 800-room hotel and two ballrooms will be located on top of the building, fully integrating the center’s functions into one unified and quickly navigable facility. Walking times between halls, ballrooms, and hotel rooms will be greatly reduced.

At the rear of the building, a large new landscaped public park will sit atop a buried garage, eliminating vast wastelands of parking lots. The establishment of a new green belt surrounding the site restores an important buffer zone of open public space that was lost during the center’s last expansion. The site that formerly marked the end of the beach and the beginning of asphalt will be transformed into an oasis within the city. 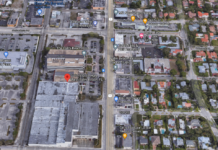