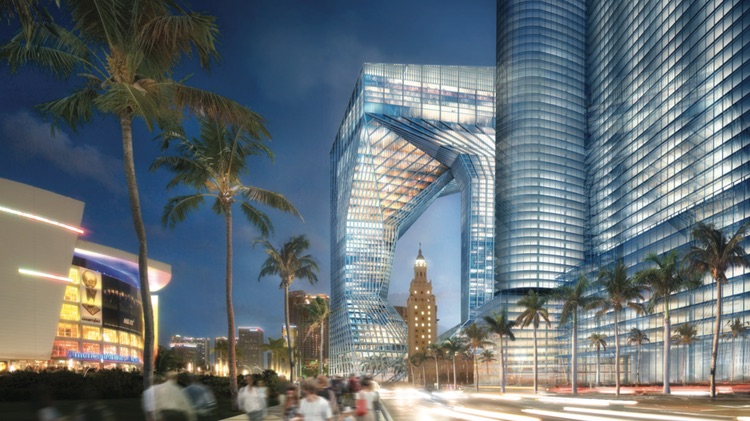 Miami Dade College’s (MDC) board of trustees have given approval to their administrators to negotiate with a third developer which  proposes to build a massive cultural center and commercial project near its downtown Miami campus.

The vote in late April  effectively placed the bid by Gregg Covin Development with Oppenheim Architecture back in the running for the public-private partnership. Now the college’s administrative can negotiate separately with that team, along with the Related Group and Nader + Museu LLP.

The Miami Herald reports the decision sets up a three-way competition between the contenders which, in that order, received  the highest scores from the evaluators out of four original applicants.

“We are honored to be included in the ongoing process and are here to support MDC, the local community, and our local economy,” Covin/Oppenheim said in a statement. “Since the very start, we have been seeking to focus our efforts towards a project that should primarily serve the needs of the larger MDC community and the public. Just as with most world-class cities, we truly believe in these types of ‘cultural and educational’ developments; they are the catalysts that can help foster a stronger sense of community and love for the arts for generations to come.”

One trustee, Daniel Diaz Leyva, said there are elements unique to Covin’s proposal that he likes, although he did not specify the details. Covin’s plan is the only one of the three that doesn’t include condos, something the developer has said he considers “inappropriate” for a public college project.d

The project would go on the 2.6-acre parking lot at 520 Biscayne Blvd., near the historic Freedom Tower. MDC required the construction of an art museum, conference center, and performing art theater for its use as part of the project.

Here are outlines of the differences between the three proposals:

Nader: Museum with 158,000 sq. ft. of exhibition space, a 3,000-seat conference center, a 1,600-seat performance theater, a sculpture garden, and 390 parking spaces. Art collector Gary Nader pledged to give $60 million worth of his art to MDC for the museum and he wants a seat on the museum’s board since it would be named after him. It would pay $15 million for the naming rights.

On the private development side, here’s what the developers would build:

Nader: Two 50-story towers with 250 condos each; a private culinary center of 29,950 sq. ft. that would partner with MDC; a 16,016-sq. ft. restaurant; and more than 1,500 parking spaces. Nader’s main financing backer would be BrasilInvest, one of the largest real estate investment firms in Brazil.

The financial considerations might change during negotiations. As it stands with the original proposals, both the Related Group and Nader would give MDC some proceeds of the condo sales, although the maximum award would be $35 million for Nader versus $5.3 million for the Related Group. The Nader proposal would offer MDC $45 million in participation while the Related Group would make a $1 million scholarship donation.