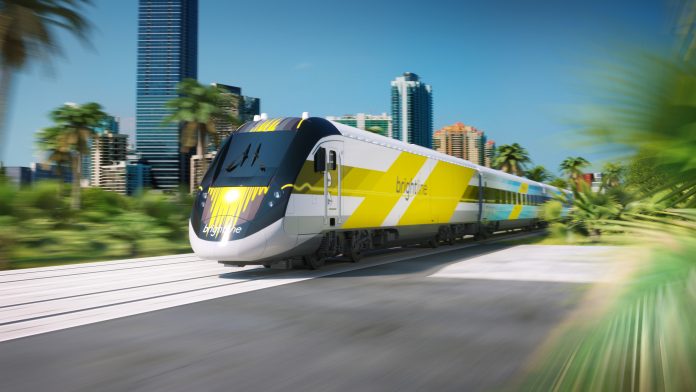 The company that describes itself as evolving into Virgin Trains has begun railway track construction.

Brightline Trains posted across its social media channels (channels that are still branded as Brightline) that it has entered into phase two of the construction project that is designed to link central Florida—specifically a brand new intermodal facility located in the new South Terminal at the Orlando International Airport—with South Florida. This involves building 170 miles of new track, which the company says will require 225 million pounds of American steel, 490,000 ties and two million spikes.

“Officially launching construction to Orlando marks a huge milestone for Virgin Trains and the realization of our vision to reinvent passenger rail in America,” said Virgin Trains president Patrick Goddard.

“Connecting Orlando and Miami, two of our nation’s greatest cities, will provide tremendous economic and environmental benefits that will be an asset to Florida for generations.”
The name switch between Brightline and Virgin is happening because of a a strategic partnership and trademark licensing agreement signed in November 2018.

“This is a historic milestone on the path to reinvent passenger rail in America and clearly demonstrates the leadership role that the private sector can play in revitalizing our nation’s infrastructure,” said Virgin Trains chairman Wes Edens.

“Virgin Trains service between Orlando and Miami will launch an American passenger rail renaissance. We expect that this will be the first of many passenger lines in the U.S. that follow this model for connecting city pairs that are too close to fly and too far to drive.”