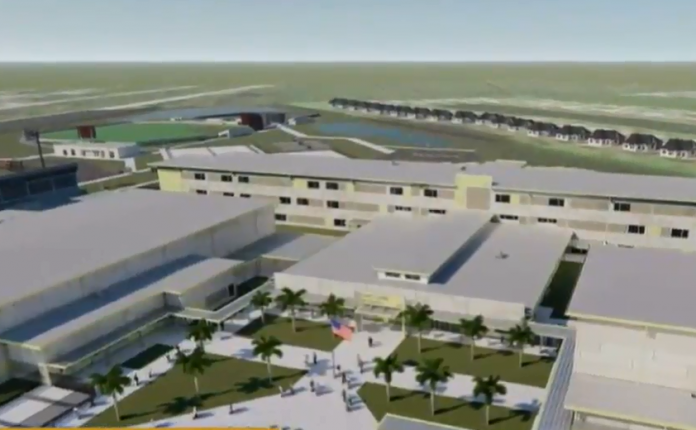 The  2,000-student campus groundbreaking marks “a new era of school build-outs that, by 2023, will grow the Lee County school district in a manner not seen since the early 2000s,” the News-Press reports.

Other planned projects include new middle and elementary school in both the East and South zones of the district, the top-to-bottom rebuilds of Franklin Park Elementary and Cypress Lake Middle schools, as well as an innovation/lab school being built with Florida Gulf Coast University. As well, there is a longer-range plan to renovate the technical centers in Cape Coral and Fort Myers, or the build-out of a Lehigh branch.

The tax increase, approved by 51.5% of the county’s voters, has collected $36.4 million in its first year (from January to June 2019). Since June, the district has collected $16.6 million, but anticipates the total will reach $83.3 million.

“The vitality of our community depends on the capacity of our children to learn and to flourish in this new age,” school district superintendent Greg Adkins said at the ceremony on Nov. 13. “We must be bold, we must be innovative, and, in the end, we must truly revolutionize education to give our children what they deserve — a world class school system.”

While the sales tax will pay for the Gateway campus, the Lee County school board decided to borrow $105 million over 10 years to pay for the project.

The school’s program includes four career academies, including carpentry, which will be connected to the construction management program at Florida Gulf Coast University, the News-Press reported.

The Top 10 Women in Florida’s roofing industry: Diversity, innovation and...